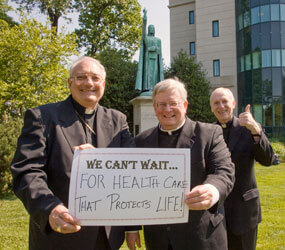 WASHINGTON – “Despite the good” that proposed health reform legislation “intends or might achieve,” concerns about the abortion wording in the Senate-passed bill compel the U.S. bishops to “regretfully hold that it must be opposed until these serious moral problems are addressed,” Cardinal Francis E. George of Chicago said March 15.

The statement from the president of the U.S. Conference of Catholic Bishops came soon after the head of the Catholic Health Association called on House members to quickly pass the Senate legislation and make changes later.

A House vote on the health reform legislation was expected by March 20, with Senate and House action to follow on a separate bill containing a set of “fixes” proposed by President Barack Obama.

Sister Carol Keehan, a Daughter of Charity who is CHA president and CEO, said in a March 13 statement that the Senate bill isn’t perfect but would “make the lives of millions more secure, and their coverage more affordable.”

She told Catholic News Service March 15 that she considered the Senate language “an acceptable way to prevent federal funding of abortion,” even if it might not be the best way or the preferred way.

Cardinal George said in his statement that the USCCB concerns were “not quibbling over technicalities.”

“The deliberate omission in the Senate bill of the necessary language that could have taken this moral question off the table and out of play leaves us still looking for a way to meet the president’s and our concern to provide health care for those millions whose primary care physician is now an emergency room doctor,” the cardinal said.

He acknowledged that the USCCB analysis “is not completely shared by the leaders” of CHA.

They believe, moreover, that the defects that they do recognize can be corrected after the passage of the final bill,” Cardinal George said. “The bishops, however, judge that the flaws are so fundamental that they vitiate the good that the bill intends to promote.

“Assurances that the moral objections to the legislation can be met only after the bill is passed seem a little like asking us, in Midwestern parlance, to buy a pig in a poke,” he added.

Sister Carol said in her statement that CHA’s priorities for health care reform were to “protect human life and dignity,” including mothers and unborn children, and to “alleviate the suffering of people who cannot afford health insurance or cannot afford the health care they need.”

She said those who want to pursue abortion coverage in their health insurance would have to “write a separate personal check for the cost of that coverage” and insurance companies would have to be carefully monitored to “assure that the payment for abortion coverage fully covers the administrative and clinical costs, that the payment is held in a separate account from other premiums and that there are no federal dollars used.”

Sister Carol, who was at the White House March 3 for Obama’s announcement of the final push for health care reform, also praised the Senate bill for a “wonderful provision … that provides $250 million over $10 years to pay for counseling, education, job training and housing for vulnerable women who are pregnant or parenting.”

A lengthy analysis posted on the USCCB Web site March 12 said the “House-approved health care reform bill follows indispensable and long-standing federal policies on abortion funding and mandates, and conscience rights on abortion, while the Senate bill does not.”

The USCCB analysis was directed at the points raised by Timothy Stolfzfus Jost, a law professor at the Washington and Lee University School of Law and co-author of a casebook widely used in the teaching of health law, in a March 11 article in The Hill newspaper.

“In our judgment, … the Jost analysis is wrong in most of its major claims,” the USCCB response said. “The Senate bill’s major flaws are as real as ever and must be addressed.”

Jost responded to the USCCB statement with a seven-page memorandum March 14 that said the Senate bill is “far more pro-life than the (USCCB pro-life) secretariat acknowledges, as has now been recognized by the Catholic Health Association and other pro-life organizations, leaders and theologians.”

“The Senate bill is essentially as pro-life as the House bill, indeed more so on some issues,” Jost said. “Pro-life members of Congress should, therefore, be supportive of the Senate bill.”

In a letter March 11, Sister Carol urge House members to “move quickly to enact health reform by passing the Senate-approved legislation in conjunction with a second ‘corrections’ bill providing for necessary legislative fixes that will improve the overall package.”

She said the corrections package should include:

– An increase in tax credits for low-income individuals and families.

– A rise in Medicaid primary-care reimbursement rates to Medicare levels.

– Extension of drug discounts for low-income patients to cover drugs dispensed for those patients during hospital stays.

And, Sister Carol said, “the bill should ensure that the final, overall health reform package will provide no federal funding for abortion.”

The USCCB analysis had a similar message on abortion in response to those who, like Jost, see no “significant differences” between the House and Senate bills on abortion.

“If the House leadership believes that to be true, it should substitute the House language on abortion for the Senate language when it makes other changes,” the USCCB said.

But Jost said such a recommendation “demonstrates a misunderstanding of the Senate procedures that constrain action at this time.” The reconciliation process “can only deal with revenues and outlays of the federal government, which does not include the abortion issue,” he said.

“The choice we face, in sum, is the Senate bill or our current health care system,” Jost added. “The Senate bill will undoubtedly save many lives through extending insurance coverage to people who cannot afford insurance. It will also in all likelihood make abortion coverage less common than it is now, since people will have to explicitly choose and pay extra for it.”