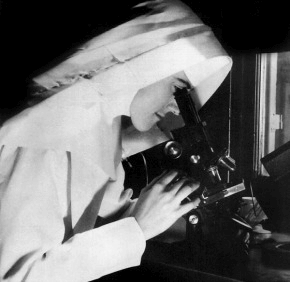 By Maria Wiering
mwiering@CatholicReview.org
BELLONA-GITTINGS – Sister Paula Marie Phelan has spent most of her life in the same place it started – Mercy Medical Center in Baltimore, where she was born 100 years ago.
The Religious Sisters of Mercy taught her in grade school at Shrine of the Little Flower School, and in high school at Mount St. Agnes in Mount Washington. After graduation, Sister Paula Marie joined them and went on to be a pioneer in the hospital’s medical technology program.
For decades, Sister Paula Marie served as the hospital’s laboratory supervisor. During that time, she developed and taught in a medical technology program that partnered Mount St. Agnes College students with Mercy Medical Center for training. The program – and Mount St. Agnes College – was eventually assumed by what is now Loyola University Maryland.
At 100, Sister Paula Marie doesn’t see herself as having done anything extraordinary – only what her community asked of her, she said.
Sister Paula Marie said her secret to longevity is “to keep yourself involved and interested in … things that people need you to be involved in.”
The centenarian celebrated her birthday in July with four parties, including one at Mercy Medical Center’s Department of Pathology, where the conference room bears her name.
‘Oh, you’ll love it’
Sister Paula Marie’s life’s work built upon the foundation laid in 1874 with six Sisters of Mercy, who came to Baltimore to take charged of a health dispensary for the poor.
The order had been founded in 1831 by Mother Catherine McAuley, an heiress who used her wealth to build a home for Dublin’s homeless and abused women. According to the Sisters of Mercy, they were the first women’s order “to leave their cloistered convent to walk the streets of Ireland.” They became known as the “walking nuns.”
In 1909, the Baltimore sisters renamed their hospital Mercy Hospital. At that time, the sisters’ primary ministries were health care and education.
In high school, Sister Paula Marie was attracted to the sisters’ work and example.
“They made you want to contribute,” she said.
Sister Paula Marie’s earliest years with the order were in elementary education. She taught at St. Bernard’s School in Baltimore and a school in Columbus, Ga. She was assigned to Mercy Medical Center in 1942 to bolster its fledgling medical technology school.
At the time, she didn’t know what a medical technologist did, so she asked her older brother, Patrick. At the time he was a medical student who would go to become a surgeon.
“He told me, ‘Oh, you’ll love it. It’s a very interesting and upcoming field of medicine,’” she recalled. “That’s how I got an idea of what it was.”
After two years of study, she became the director and supervisor of Mercy’s School of Medical Technology and of its clinical labs, and served as a liaison between the school and the hospital. She was grateful and proud of her students and the success they achieved, she said.
“It was very challenging and interesting,” she said of her 48 years in the lab.
‘Some definite purpose’
In her first years at Mercy Medical Center, every department had at least one sister working in it, she said. That’s no longer the case, she said, but the hospital retains the sisters’ spirit. Patients and staff, however, both appreciated having the sisters around, she said, because of the sisters’ “little connection with God.”
“It was just a comfort that they had somebody they could talk to or call on. It just made them feel secure,” she said. “Not that people who work there today don’t, but it’s not the same visible presence.”
Sister Paula Marie retired from Mercy’s pathology department in 1990 but continued to volunteer and serve as the convent coordinator for sisters living at Mercy, a position she began in 1970. In 2006, she left Mercy for Mercy Villa, a Baltimore retirement convent for Sisters of Mercy and the Baltimore-founded Mission Helpers of the Sacred Heart.
After a lifetime of learning, turning 100 is still “frightening,” Sister Paula Marie admitted. “I’m so afraid of losing my mental ability, to keep track of what’s going on.”

Religious Sister of Mercy Paula Marie Phelan takes the lead in the charity 1K walk for Marian House at the Villa, a retirement home for Sisters, Sept. 17. At 100 years old, Sister Paula Marie was the oldest participant, noting that it made sense for her to finish first since she was born first. (Tom McCarthy Jr. | CR Staff)
When she joined the Sisters of Mercy, she received a ring engraved with Philippians 4:13, a verse she chose: “I can do all things through him who strengthens me.” It’s the same verse inscribed on a plaque designating her namesake conference room at Mercy Medical Center.
“God has given me many blessings – not the least of which is longevity – for some definite purpose,” she wrote in 2005, the year she turned 91. “Therefore I take every opportunity I can to fulfill this purpose.”
Also see:
Retired sisters on the move to support Marian House
Mercy honors ‘pioneer’ in medical technology
PrevNext