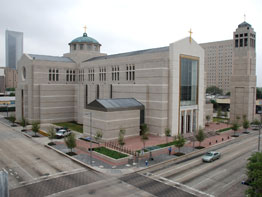 HOUSTON – As the 23 bells of the campanile at the new Co-Cathedral of the Sacred Heart in Houston called forth the faithful for its Mass of dedication, the special choir gathered for the occasion sang “The Church’s One Foundation.”

The April 2 dedication was the culmination of years of planning and marked the birth of a new central place of worship for the 1.3 million faithful within the borders of the Archdiocese of Galveston-Houston.

Following a procession of deacons, priests and nearly two dozen bishops from the United States, Honduras and Canada, Deacon Gerald DuPont carried a box containing the relics of 11 saints as well as a sizable fragment of the true cross that St. Helena, the mother of the Emperor Constantine, brought back to Rome from Jerusalem.

Among the relics were those from the first American-born saint, St. Elizabeth Ann Seton, St. Leo the Great, St. Margaret Mary Alacoque and St. Therese of Lisieux, known as the Little Flower.

Cardinal Daniel N. DiNardo of Galveston-Houston was the main celebrant for the three-hour Mass, which was broadcast live by local television station KTRH Channel 13, with commentary by Cardinal John P. Foley, grand master of the Knights of the Holy Sepulcher and former head of the Pontifical Council for Social Communications at the Vatican.

Immediately after reaching the altar, Cardinal DiNardo, along with the other three local bishops, returned to the front of the baptismal font in the center of the nave for the blessing and sprinkling of water.

“Bless this water; sanctify it. As it is sprinkled upon us and throughout this church make it a sign of the saving waters of baptism by which we become one in Christ, the temple of your Spirit,” Cardinal DiNardo prayed.

Throughout the Mass the new worship space was filled with music from the choir loft courtesy of the more than 70 singers and musicians who comprised the special choir and orchestra for the event.

The archdiocese commissioned three new pieces of music for the special event – “In the Temple of the Lord” by Father Dao Kim Nguyen, “Happy Are All Who Fear the Lord” by David Ashley White and “Megalynarion of Pascha” by Naji Hakim.

During his homily Cardinal DiNardo thanked those responsible for making the new co-cathedral a reality, beginning with Archbishop Fiorenza.

“If we could in our imagination combine Ezra and Nehemiah, we would find a person of spiritual insight, a shepherd and master of practical matters. We have that in Archbishop Fiorenza,” Cardinal DiNardo said.

Following the homily, the relics gathered especially for the dedication of the new co-cathedral were lowered under the altar and the reliquary was sealed.

After the first Mass celebrated in the new cathedral, the Blessed Sacrament was carried in procession with incense and candles and placed for the first time in the tabernacle which sits majestically in the Reservation Chapel in the west transept of the church.

Before the close of the Mass, Archbishop Fiorenza approached the ambo to say a few words.

“If my words are not brief then I think I would follow in the tradition of St. Thomas of Becket, who was murdered in his cathedral,” Archbishop Fiorenza said, drawing laughs from the congregation.

Thanking Cardinal DiNardo “for his most gracious words,” Archbishop Fiorenza also extended special thanks to the Knights of Columbus whose fundraising efforts helped make the Reservation Chapel of the Blessed Sacrament a reality.