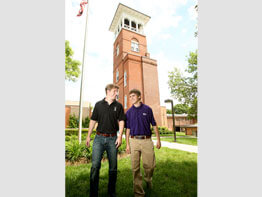 The saga began in the mid 1880s, when a teenage boy from Southern Maryland boarded a steamboat in St. Mary’s City, ventured up the Chesapeake Bay, disembarked in Baltimore and made his way a few miles west, to Irvington and a fledgling school.

It ended June 1 at the Cathedral of Mary Our Queen, Homeland, where Matthew David Cecil accepted his diploma from Mount St. Joseph High School, completing the only family line to send five generations there.

Matt has several male cousins, the oldest being 10, who could always become Gaels.

There is also his brother, John Allan III, Class of 2004, who recently received his bachelor’s degree from the University of Richmond. A new position as a business analyst will keep him in Virginia for now, but he is accustomed to a certain line of questioning.

“There have always been jokes,” John Allan III said. “People ask, ‘Can we expect a sixth generation?’ ”

While it may be too soon to speculate about that possibility, what has already come is a historian’s delight, weaving together three institutions that have had an indelible impact on Catholicism in Maryland: Mount St. Joseph; the men who founded it, the Xaverian Brothers; and the Cecil family.

“One of my freshman year courses required a family genealogy,” said the 2008 graduate, Matt. “I printed out 75 pages of information that my father has researched, got a 100 on that assignment.”

John Allan Cecil II, Class of 1974 and one of five brothers to attend Mount St. Joseph, has an embarrassment of similar riches to share.

In St. Mary’s County alone, there is Cecil’s Old Mill, listed on the National Register of Historic Places; a family farmhouse filled with documents and photos; and the land in Great Mills that an ancestor donated for the distinctively named Holy Face Church.

“Our ancestors came to America for freedom of religion,” Mr. Cecil (‘74) said. “Catholics were being persecuted in England in the 17th century. That’s why we’re here.”

On the lower right corner of the first map of the Maryland colony, produced in 1635, is the script T. Cecill sculp, the credit for the engraver.

That would be Thomas Cecil, who in 1658 saw his son John sail from England to Southern Maryland.

Thomas Cecil had worked from drawings supplied by two men who had been passengers on the Ark and the Dove. Those ships left the Isle of Wight in England for the New World, stopped in the Caribbean, made their way up the Chesapeake, steered to port and then the Potomac.

The Ark and the Dove made land at St. Clement’s Island on March 25, 1634, the genesis of Maryland Day.

John Thomas was born in 1865, while the Civil War divided Maryland and put the Cecils on the side of the Confederacy. The lack of business school in Southern Maryland sent him north to Mount St. Joseph, which had been chartered as a college in 1876.

Its 1887 commencement honored 12 graduates, including John Thomas, who received a Bachelor of Accounts, akin to a business degree.

Logistically, there were simpler alternatives in Washington, D.C., but Catholic links probably factor into the Cecils choosing Mount St. Joseph.

Brother James M. Kelly, C.F.X., president of Mount St. Joseph, came to the institution in 2001, when John Allan III (‘04) was beginning his sophomore year. Shown a copy of the great-great-grandfather’s 1887 diploma, Brother James studied it with fascination.

“I do the history for our community (the Xaverians), and the brothers listed on the 1887 graduation announcement are legendary people,” Brother James said. “Brother Isidore, at the mention of his name, every brother should bow his head.”

According to the online Catholic Encyclopedia, in 1907 Brother Isidore became the provincial, the acting officer, of the Xaverians in America. Brother James explained the ties among the Cecil family, the Xaverians and the man who brought the order to Baltimore, Archbishop Martin John Spalding, the seventh bishop of the Archdiocese of Baltimore.

“It was Archbishop Spalding who brought the Xaverians from Belgium, to his home in Kentucky, and then to Baltimore.”

“My grandfather (‘12) used to tell me stories about leaving the family farm, going to a dock in St. Mary’s City, and boarding the steamboat for Baltimore,” John Allan II (‘74) said. “He would take a streetcar from the Harbor to Irvington. In my dad’s time, he came up for the semester by car.”

John Thomas (‘42) fought in World War II, settled in Anne Arundel County, had a lengthy career in civil service and died in 1999. He and his widow, Anna Theresa Smuck Cecil, ensured that all five of their sons went to Mount St. Joseph, in order:

John Allan II (‘74) and his wife, Kim, were parishioners oft St. John the Evangelist, Severna Park, when their sons were baptized. The family now lives in Odenton and attends Our Lady of the Fields, Millersville – located on Cecil Avenue, a road named for yet another ancestor, according to Mr. Cecil.

John Allan II (‘74) and III (‘04) both were taught English by Bernd McDivitt, who has worked at Mount St. Joe since 1966 as an administrator or classroom instructor.

“First, they look a lot alike,” Mr. McDivitt said of the Cecils. “I remember the grandfather (‘42), and what he meant to the school. I’ve been the moderator of the Fathers’ Club since 1989, and the father (‘74) was instrumental in getting the financing for the grotto here on campus.”

The Cecils reminisced in mid-May, before heading to their last mother-son banquet at Mount St. Joseph.

“When Allan and I went in 2004, when he was a senior, all of the other mothers were sad,” Mrs. Cecil said. “I wasn’t, because I knew I was going to get another four years
with Matt.”

Despite the family ties, her boys said that they were not lobbied to attend Mount St. Joseph.

“To be honest, when I started looking at high schools, I didn’t know about the family tradition,” said John Allan II (‘04).

While his father said “I didn’t want him to feel any pressure,” Mrs. Cecil had come to appreciate the Xaverian presence, as men like the late Brother Declan Kane, C.F.X., a legendary character in the order, had become a fixture at Cecil baptisms and first Communions.

The Matt (‘08) had an early grasp on his education destiny. At his kindergarten graduation, he asked “me go St. Joe now?”

He will attend Nichols College in Dudley, Mass. A goalie on a lacrosse team that plays in one of the nation’s best prep leagues, he was also a member of the Leadership Club, the Ski Club and Lifesavers.

His big brother was a member of the National Honor Society.

“I knew high school was going to be harder because teachers expected more of me,” Matt said. “Allan is a wonderful student … I can’t believe I said that.”

While their ancestors used inkwells to pen themes, this generation of Cecils uses its technology skills to make the family’s genealogy convenient to track.

“Only a few times do you get to feel like you made the right decision for your kids,” Mrs. Cecil said. “I always felt good about this one.”

What will the most recent graduate take from his experience at Mount St. Joseph?

“The friendships, the teachers,” Matt said. “There are not a lot of places where you can call a teacher on the phone and just talk.