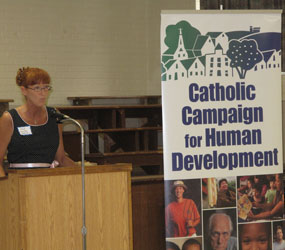 As thousands of fans filed out of Oriole Park at Camden Yards several years ago, Veronica T. Dorsey was part of a frustrated crew of people that cleaned up the tons of trash left behind.

If she brought something to eat, Dorsey said she was forced to eat in a bathroom she had a cleaned or a closet. She joined Baltimore’s United Workers Association, which works to educate and bring self-respect to workers in public facilities and institutions. The group advocates living wages, safe working conditions and a share in the decisions affecting workers’ welfare. United Workers is currently working on establishing fair conditions for employees at powerful Inner Harbor businesses.

Similar stories like hers were highlighted Aug. 19 at the annual Archdiocese of Baltimore’s chapter of the Catholic Campaign for Human Development luncheon at Baltimore’s St. Francis of Assisi.

The Catholic Campaign for Human Development is celebrating its 40th anniversary this year.

The United States Catholic Conference of Bishops’ organization works with poor and low income people to identify needs and to foster long-range change. The USCCB says millions have been assisted through CCHD grants.

The luncheon included grant presentations to groups in the Archdiocese of Baltimore that are working at the root sources of poverty to make changes in communities. United Workers was the recipient of its sixth CCHD grant, this time a national prize of $50,000.

In total, eight grants (seven national and one local) were awarded, with $265,000 going to the groups. That was down $40,000 from last year. An annual collection held in parishes across the Archdiocese of Baltimore for CCHD brought in more than $215,000 in November of 2009, according to Auxiliary Bishop Denis J. Madden.

“It’s seed money that gives them a start that they otherwise would not have gotten,” Monsignor Burke said. “What happens with that money is unbelievable.”

Phil Bailey, program director of winter relief for the ecumenical Arundel House of Hope, was there to see his group receive a $25,000 national grant for its efforts to train and employ Anne Arundel County’s homeless. The group runs a mobile food trailer called “Doughy Dogs,” where people learn job-retaining skills by working in the trailer.

“What this allows us to do is continue the ministry,” Bailey said of the grant.

Father Gerald J. Bowen, pastor of Elkridge’s St. Augustine, came with parishioner, Amy Lamke. The parish has been a chief supporter of People Acting in Howard (PATH), which received a $50,000 national grant. Lamke is an organizer for the group, which works for inclusive, fair-housing for needy families in Howard County.

Bishop Madden said the grant money is not a hand-out, but allows organizations to assist people to find, “a way out of poverty, which is still gripping over 38 million Americans.”

Glyndon Bailey, CCHD’s local chairman, told the groups there would be two informational meets at St. Francis of Assisi soon. The first will be Sept. 8 at 6:30 p.m. so groups can learn what funding is available, what funders are seeking, funding criteria and ideas for resources to strengthen organizations.

Another gathering will be held Oct. 26 at 6 p.m. at St. Francis about finding grant money.