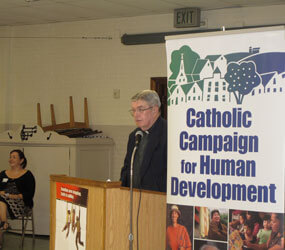 During weekend Masses Nov. 19-20, parishes across the Archdiocese of Baltimore will hold collections for the Catholic Campaign for Human Development, the United States Conference of Catholic Bishops’ effort to address the root causes of poverty by giving to groups working to eradicate economic strife.

Archbishop Edwin F. O’Brien, apostolic administrator for the archdiocese, wrote a letter to Catholics in October encouraging them to take part in the collection.

The collection is especially important during the country’s economic struggles, the archbishop said. During an August luncheon to award groups CCHD grants to Baltimore, Sean Wendlinder, the group’s regional manager, said, “The mission of USCCB and CCHD is founded on the principles of the church’s Catholic social teaching.”

During that luncheon, Monsignor William Burke, the CCHD’s longtime Baltimore director, told awardees that they were helping to build communities of peace and justice.

Dear Friends in Christ,
With more than 46 million Americans living in poverty and many families, especially children, not properly nourished, we have a unique opportunity to help. On the weekend of November 19 and 20, your donation of at least ONE HOUR’S PAY/WAGES will make a real difference. The annual collection for the work of the CATHOLIC CAMPAIGN FOR HUMAN DEVELOPMENT (CCHD) provides not a hand out but a way out of this frightening poverty for many groups of people.
Last November 2010, $212,000.00 was donated in our parishes. In turn, 12 self-help, poverty-level-income groups shared $319,000.00 in national and local CCHD grants this past August.
Thank you for making this Gospel-based option for the poor. Thank you for rebuilding lives and communities with your prayers and generous support for the work of the CATHOLIC CAMPAIGN FOR HUMAN DEVELOPMENT.
In the Lord,
+Edwin F. O’Brien
Apostolic Administrator