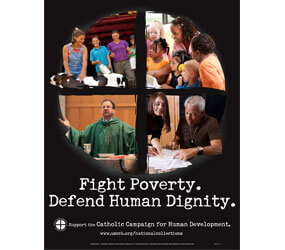 WASHINGTON – Officials with the Catholic Campaign for Human Development refuted a report that 55 agencies funded by the U.S. bishops’ anti-poverty program in 2010-11 were in conflict with church teaching.

Bishop Jaime Soto of Sacramento, Calif., Bishop Stephen E. Blaire of Stockton, Calif., and Ralph McCloud, CCHD executive director, said the charges leveled in an American Life League study against all but one of the agencies were unfounded.

McCloud told Catholic News Service Nov. 4 that funding was withdrawn from one organization cited in the report. That case involved the immigrant rights group Centro Campesino in Owatonna, Minn., which was found to be distributing condoms. McCloud acknowledged the league’s role in pointing out the organization’s practice.

McCloud also said the 54 remaining agencies were found in compliance after a follow-up investigation by CCHD staff that involved contacting each named group.

The 212-page report – completed in March but not made public until October when it was posted on the American Life League’s website, according to its primary researcher – accused the grass-roots organizations of promoting abortion, homosexuality and Marxist ideology contrary to church doctrine.

Michael Hitchborn, director of the league’s Defend the Faith project and the report’s author, said his research showed that the organizations violated church doctrine either through specific activities or through coalitions addressing a broad array of social concerns.

The agencies in question received nearly $1.9 million in 2010-11, according to CCHD records. Overall, CCHD funded 229 organizations with national grants from a collection that netted about $9.5 million for both national and local diocesan distribution during the period.

The report is the latest salvo from the American Life League and a small group of vocal critics, which, since 2008, have questioned the thoroughness of CCHD’s process for vetting grant applications from poverty-fighting agencies. It was released just weeks before the annual CCHD collection in parishes, which is set for the weekend of Nov. 19-20.

The persistent questions were among the factors that led CCHD to revise its review process in October 2010 in an effort to renew the grant-making program. Capuchin Father Daniel Mindling, a moral theologian at Mount St. Mary’s Seminary in Emmitsburg, also joined the program as a consultant on moral and ethical issues.

The bishops said the American Life League’s charges “are without substance.”

“CCHD staff has met repeatedly with representatives of the American Life League to explain CCHD’s mission, requirements and processes,” the memo said. “They (league officials) simply do not agree with CCHD’s mission and how we apply our guidelines and requirements.”

The memo also said the grant awards are based on the judgment of local bishops and the vetting process of each diocese, “not the repeated accusations of those with clear ideological and ecclesial agendas.”

McCloud said his staff discovered that the charges were based on information obtained from outdated websites and without contacting most of the cited agencies for verification or were incorrect assessments of the poverty-fighting program’s guidelines regarding memberships in coalitions.

“We did several things. We contacted the diocese, contacted the group. We did due diligence on looking into what the complaints and allegations were,” McCloud said of the follow-up investigation.

Fourteen of the organizations, the report said, were involved in activities directly in opposition to church teaching, while the remaining 41 were part of coalitions in which some activities contradict Catholic moral and social teaching.

Hitchborn told CNS that CCHD officials have not adequately addressed the concerns raised by the research.

“They issue a very sweeping blanket dismissal of the report, never once addressing the specifics. They don’t go into any of the information we have in our report. They just say, ‘It’s wrong,’ ” he said.

McCloud and Hitchborn confirmed that the two parties met twice – in April and September – to review the report’s findings. The meetings began after American Life League sent its study through to Bishop Soto in March.

Hitchborn said that the report subsequently was sent in July to Archbishop Timothy M. Dolan of New York, president of the U.S. Conference of Catholic Bishops. After the September meeting, the American Life League sent the report to all U.S. bishops. A few weeks later, the document was posted on the league’s website promoting CCHD reform – reformcchdnow.com – and made available to its membership.

Hitchborn denied that the league wants to end CCHD altogether because of an ideological opposition to community organizing or the fact that the program’s beneficiaries work for political and social change on behalf of poor and marginalized people.

“The only thing we’re advancing is pro-life, pro-family ideals and if that’s against what they’re doing, then they are only indicting themselves,” he said.

Hitchborn also told CNS the report was reviewed by William H. Marshner, professor of theology at Christendom College in Front Royal, Va. Marshner said he concurred with the findings after reviewing them for a week in an Oct. 13 letter to Paul E. Rondeau, the league’s executive director.

The American Life League report can be found online at www.reformcchdnow.com. The correspondence from Bishop Soto and Bishop Blaire is online at usccb.org/about/catholic-campaign-for-human-development/Who-We-Are/soto-blaire-cchd-memo.cfm and usccb.org/about/catholic-campaign-for-human-development/Who-We-Are/cchd-report-9-28-2011.cfm.