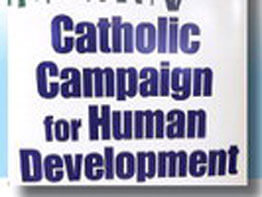 As Americans gather around dining room tables this November to celebrate the feast of Thanksgiving, more than 37 million people across the United States will be living in poverty.

That is why the Catholic Campaign for Human Development is asking individuals in the Archdiocese of Baltimore to contribute one hour’s pay/wages toward the annual collection, which will take place in churches, Nov. 17-18.

According to Monsignor William F. Burke, pastor of St. Francis of Assisi, Baltimore, and head of the local CCHD, members of the archdiocese contributed $252,000 toward the November 2006 collection – the largest amount ever.

As a result, seven national and five local grants totaling $252,000 were distributed to groups in the archdiocese during the annual CCHD luncheon Aug. 23 at St. Francis.

“We have faced many challenges, but we have been able to organize,” said Our Lady of Pompei, Highlandtown, parishioner Paula Cisneros, whose Latino group, Proyecto Esperanza, was the recipient of a $25,000 grant this year.

The goal of the CCHD, which was started nearly 40 years ago by U.S. bishops, is to call on parishes to promote social justice education programs and to create a pool of grant monies for groups of poverty-level income Americans.

The organization addresses the root causes of poverty and supports groups of people of low income as they work to bring long-term change to their lives and communities.

This year, the national office of the CCHD will distribute more than $9.5 million in grants to 314 projects in 46 states, the District of Columbia and Puerto Rico.

Members of the archdiocese can learn more about the CCHD during the annual social ministry convocation which will be held March 1, from 9 a.m. to 3 p.m., at The Seton Keough High School, located at 1201 Caton Ave., Baltimore.