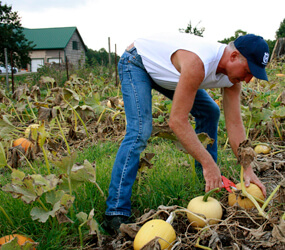 WASHINGTON – “Families are struggling. Faith is calling” is the theme for this year’s national collection for the Catholic Campaign for Human Development, which will be taken up in most U.S. Catholic churches the weekend of Nov. 21-22.

“This year, our call as Catholics to bring glad tidings to the poor … to proclaim liberty to captives and recovery of sight to the blind, to let the oppressed go free is more important than ever before,” said Bishop Roger P. Morin of Biloxi, Miss., who is chairman of the U.S. bishops’ CCHD subcommittee.

He made the comments in a letter to parishes asking Catholics to be as generous as possible during the annual collection that is the primary source of support for the U.S. bishops’ domestic anti-poverty program.

Twenty-five percent of the proceeds support projects in the diocese where the funds are collected.

“The mission of CCHD is crucial in 2009 – to uplift and embolden all who are one layoff or one medical scare away from the poverty line – and all who are already there,” the bishop said.

The nation’s current economic crisis has left many families and individuals without the security of a job, health care or a sufficient retirement fund, a press release on the collection noted.

According to U.S. census figures, the number of people currently living in poverty is estimated at 39.8 million, which is almost 3 million more than a year ago. The unemployment rate reached a 26-year high of 9.8 percent in September.

CCHD-funded programs “empower the poor and marginalized to make decisions, seek solutions to local problems and find ways to improve their lives and neighborhoods,” according to the agency. CCHD also has educational programs to teach Catholics about poverty and creates opportunities for them to interact with the poor and reflect on a faith response to poverty.

Among the recipients was the Diocese of St. Petersburg, Fla., which received a grant to support the Faith and Action for Strength Together project that involves member parishes and other member congregations in working on issues related to education, transportation and affordable housing.

Another recipient was the Chicago Archdiocese’s Progress Center for Independent Living, which empowers people with disabilities to live full, rewarding lives outside institutions.

Other award recipients included the Archdiocese of Baltimore, the Detroit Archdiocese and the Diocese of Stockton, Calif.