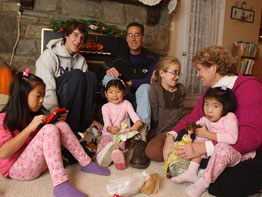 Six years ago, a mother in a remote corner of China laid her baby along a roadside and walked away. Suffering from a cleft palate and unable to nurse, the little girl was left alone for an unknown period of time before a passerby discovered the starving child and took her to an orphanage filled with other abandoned children.

In a nation that mandates one child per family and whose culture puts a premium on sons, it’s not uncommon for families to abandon babies in the world’s most populated country – especially if those children have special needs or happen to be girls.

A few days before Thanksgiving, that once-starving girl wrapped her arms around Ann Bartlinski and giggled ebulliently. Smiling broadly and sporting a turquoise ribbon in her coal-black hair, the 6-year-old first-grader at St. Mark in Catonsville told her adoptive mother what family means to her.

“I like having a family because they love me,” said Mary Bartlinski, her cleft palate long since repaired and her English as perfect as any native-born American.

Seated in her family living room in Catonsville, Mrs. Bartlinski returned her daughter’s hug and gently kissed the girl’s forehead.

“I love you more than anything in the world,” she said.

Family life has changed in some remarkable ways in the four and a half years since Ann and her husband, Edward, welcomed Mary into their home. The St. Mark, Catonsville, parishioners were so inspired by Mary, they decided to adopt more special needs children from China. They did it, they said, because they believe God is calling them to be generous.

Only 18 months after they adopted Mary, the Bartlinskis returned to China to take home Lucy, a little girl who was so sick that the Bartlinskis feared she wouldn’t survive the 20-hour plane ride to America.

“The only organ in her body that’s functioning perfectly is her liver – everything else is either missing or not working,” said Mrs. Bartlinski, noting that Lucy had asthma, scoliosis, lung disease, a cleft palate and a whole slew of other medical problems. The cleft palate is repaired and Lucy is making progress on her other difficulties.

Emilia, the 5-year-old newest addition to the family who was adopted last year, also has a wide range of medical problems. An infection she contracted in a Chinese orphanage destroyed the bones in her legs and arms. Doctors at Sinai Hospital in Baltimore rebuilt her legs and are planning to repair her arms in two months.

For a girl who just started walking in August, Emilia scurried across her living room floor with the alacrity of a track runner – playing games with her sisters and showing off for a visitor. She was named for the mother of Pope John Paul II and is a pre-schooler at Hillcrest Elementary School in Catonsville.

Seeing their father pet Miss Sue, one of the family’s six Himalayan cats, Lucy and Emilia ran to him and joined in showering affection on the feline.

“I don’t remember what life was like without them,” said Mr. Bartlinski, a chiropractor. “We’re all just one, big happy family.”

Mr. and Mrs. Bartlinski said their adoptive daughters easily blended with their biological children, Grace, 9; Alex, 17, Paul, 20 and Ed, 22. Within two weeks of living in Baltimore, each of the children was already speaking some English.

As a Baltimore Ravens’ season-ticket holder, Mr. Bartlinski proudly pointed out that Mary’s first words in English were, “Touchdown Ravens!”

The Bartlinskis observe Chinese holidays and encourage their children to learn about their culture. They are studying the Chinese language and often prepare Chinese cuisine.

The biggest challenge has been financial, according to Mr. Bartlinski, who noted that each adoption cost $20,000.

“That’s the biggest issue by far because it’s much different from domestic adoption where you get a lot of tax help and aid,” he said, noting that his insurance helps with additional medical expenses. “We want to adopt more, but we can’t at this point. If it’s God’s will, it will certainly happen. It’s sad because so many kids need help.”

The Bartlinskis dream of one day opening their own orphanage in China that will be dedicated to special needs children. They strongly encourage other families to make room for adoptive children.

“It’s absolutely the best thing you could ever do,” said Mrs. Bartlinski. “It changes your life in ways you can’t even imagine – for the better.”

“Follow God’s will,” he said. “It may seem impossible, then suddenly it happens.”