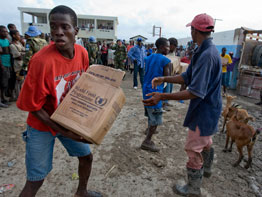 VATICAN CITY – Catholic relief agencies and parishes worldwide are responding to the devastation in Haiti, battered by four deadly hurricanes.

Officials of Caritas Internationalis, the umbrella organization for 162 national Catholic charity organizations, told Catholic News Service Sept. 15 they are seeking $4.3 million in donations for relief aid to the poorest country in the Americas.

“The series of natural disasters affecting Haiti comes at a critical time, as the vast majority of the population is already struggling with rising living costs,” said Patrick Nicholson, a Caritas spokesman in Vatican City. “Caritas has already begun helping the worst-affected people despite it being difficult to reach cutoff communities.”

Officials with the U.S. bishops’ development and aid agency, Catholic Relief Services, said they are mobilizing workers in Haiti, where more than a million residents have been displaced by the storms.

Development and Peace, the international development organization of the church in Canada, already has committed $50,000 in relief funds to Haiti and is appealing for more donations.

Four hurricanes have swept through Haiti since the middle of August, killing hundreds of people, devastating agricultural production, crippling the nation’s infrastructure and displacing about 9 percent of the population.

“Already many people have succumbed,” said Bishop Yves Marie Pean of Gonaives. “Many more will die if we can’t get them the immediate support they require.”

Holly Inurreta, CRS regional technical adviser for emergencies in Haiti, was in the flood-ravaged Caribbean nation before and after Hurricane Ike and said the storms had turned the roads into raging rivers, making it difficult to get emergency supplies to those in need.

Anne Catherine Kennedy, the Development and Peace program officer for Haiti, said: “We are extremely concerned, because Haiti is particularly vulnerable to this type of disaster. Deforestation and erosion, linked to extreme poverty, have led to the construction of substandard homes, which are easily swept away during flash floods and wind storms.”

Throughout the 500 years since European explorers first set foot on the shores of Haiti, the inhabitants have experienced slavery, extreme poverty, political violence and revolution. Earlier this year, rising food costs caused civilian rioting that turned deadly and forced the resignation of the country’s prime minister.

“I find myself repeating daily ‘as if Haiti needed one more thing, one more disaster or catastrophe to befall its people,’” said Theresa Patterson, executive director of the Parish Twinning Program in Nashville, Tenn. “There really are no words to describe the silent holocaust that continues to go on in Haiti.”

The twinning program has paired hundreds of parishes in the U.S. and Canada with parishes in Haiti and recently opened a hospital near Gonaives, the only health care center in the region. It is accepting donations on behalf of the storm victims in Haiti and will direct those contributions to areas that have been impacted the most, Patterson said.

While she has compassion for residents who suffered loss in Texas following Hurricane Ike, she said people often forget about Haiti when a U.S. tragedy occurs.

“We all know that Katrina killed 1,500 in New Orleans (in 2005) and on the Gulf Coast and that thousands rallied to the victims,” Ms. Patterson said. “Tropical Storm Jeanne (in 2004), which did not even make landfall in Haiti, killed an estimated 2,000 in Gonaives alone. For a short time (now) there will be meager relief, as with Jeanne and now with (Hurricanes) Fay, Gustav, Hanna and Ike. But the world, the U.S., even the Haitian government and all the relief agencies will soon forget what happened in Haiti.”