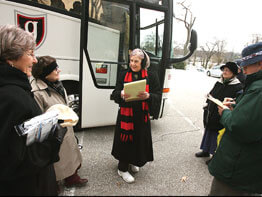 Braving bone-chilling temperatures, hundreds of Catholics from the Archdiocese of Baltimore were among the tens of thousands of people who converged on the nation’s capital for the 35th-annual March for Life Jan. 22.

Continuing a trend of recent years, young people were very much represented at the peaceful demonstration – making up a large portion of those who prayed at a Jan. 21 vigil Mass and then rallying on the mall and marching to the Supreme Court building Jan. 22, the anniversary date of two Supreme Court decisions that legalized abortion.

“By 8:15, 25,000 seats were already taken, and young people had to be sent to three neighboring parishes,” said Bishop Malooly, who arrived at the march early with Mark Pacione of the archdiocesan division of youth and young adult ministry to pass out pro-life hats and earmuffs.

“It was so encouraging to again see so much enthusiasm from the young people,” Bishop Malooly said.

Bishop Rozanski said young people are deeply committed to the pro-life cause and they recognize that promoting the sanctity of life isn’t just something that happens one day a year.

“It’s an ongoing effort,” he said. “They know we’re in it for the long haul and they’re not at all discouraged by that.”

Bishop Rozanski said he was proud that the archdiocese was well represented by students from Mount St. Joseph in Irvington, who brought forward the gifts during the Verizon Center Mass.

Ginny Dauses, campus minister at St. Mary’s High School in Annapolis, led a group of more than 200 students from her school who motorcaded to the march in four buses. It was the largest number of students who have ever participated in the march, she said.

“Kids are on fire for the culture of life,” she said. “They’re not just here to miss a day of school. They got up at 6 a.m. and they are out here singing and doing cheers to say we want Roe v. Wade to go.”

Roe v. Wade and its companion case, Doe v. Bolton, are the 1973 Supreme Court decisions that legalized abortion virtually on demand in the United States.

Rachel Doring, a 16-year-old junior from St. Mary’s, said she has participated in the march since fifth grade.

“We’re a voice for the voiceless,” she said. “The unborn babies can’t stand up for themselves.”

Corrie Dubyoski, a 15-year-old sophomore from Mount de Sales Academy in Catonsville, attended the march for the third time.

“I feel strongly about pro-life, and I feel if everybody gets involved it makes a difference,” said Corrie, a parishioner at St. Agnes, Catonsville.

“It’s wonderful,” he said. “It’s a bunch of people gathering together and having a great time and believing in what we believe in.” The best part, he added, “is being able to share your faith with other people while having a good time.”

Cindi Ritter, a parishioner of St. John the Evangelist in Hydes who works at Pregnancy Center North in Baltimore, rode the bus to the march from St. Ursula, Parkville, with a group of mostly home-schooled families.

“Everyone is just very excited about standing up for life,” she said.

Monsignor James P. Farmer, pastor of St. Ursula, said the march is about witnessing the “the power of goodness.”

“We are supported by the belief that God’s goodness is greater than the power of evil. Although the weather is cold, our hearts and souls are warmed by the love of the Creator.”