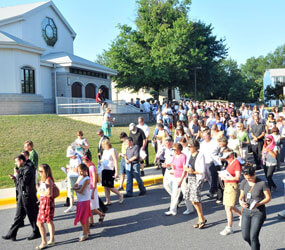 About 270 people took a neighborhood walk together on a hot summer evening in Germantown July 31. As part of the Summer of Mercy 2.0 events to witness for life, people of all ages processed from Mother Seton Church praying the rosary, and they walked a few blocks to the nearby office complex, where late-term abortionist Dr. LeRoy Carhart has been practicing since late last year.

Parents pushed children in strollers or held their young children’s hands, walking beside senior citizens and people from all walks of life with roots in countries around the world, praying together for an end to abortion, for the millions of unborn lives lost in this country, for healing for the men and women affected by it, and for a change of heart for those who provide abortions.

The nine-day series of Masses and prayer rallies for life began July 30 and is jointly sponsored by a coalition of groups, including the Archdiocese of Washington, the Archdiocese of Baltimore, 40 Days for Life, Priests for Life, the Pro-Life Action League, Pro-Life Unity, Operation Rescue, and other groups and churches.

Before the rosary procession, the Summer of Mercy 2.0 events for that day opened with a Mass celebrated at Mother Seton Church by Washington Auxiliary Bishop Francisco Gonzalez. The bishop encouraged the 700 people attending the Mass to be like prophets and stand as witnesses for life in a world permeated by a “culture of death.”

The bishop praised efforts like Project Rachel, which promote healing for all those affected by abortion. “Abortion is a very serious sin, but the mercy of God has met no sin that can’t be forgiven,” he said.

As part of the Summer of Mercy 2.0, on Aug. 6, an afternoon of prayerful remembrance and intercession will be held at Mother Seton Parish, 19951 Father Hurley Blvd. in Germantown, from noon to 3 p.m., sponsored by Project Rachel Ministries of the Archdioceses of Washington and Baltimore. That afternoon, Washington Auxiliary Bishop Martin Holley will celebrate a 2 p.m. Mass at Mother Seton.

Father Carlos Benitez, pastor of Mother Seton, led the rosary procession through the neighborhood surrounding the parish. “I think the most important thing is to show since we are one body, that the Lord is present. God is here … That women who are contemplating abortion or suffering a difficult pregnancy, that we’re here, there’s a place to get help, someone is thinking of them, they are not alone. We are praying for them (to have) courage,” he said.

After walking past a veterinary clinic, insurance and dental offices and a yoga center, those participating in the rosary procession knelt to pray by police tape set up as a barrier perhaps 40 yards from the office complex where Carhart has performed about 60 abortions a month. He told the Washington Post in a recent interview that the abortions that according to the article involved “fetuses with anomalies,” but the only example cited was a 21-week old fetus with spina bifida, which is a disability.

Among those participating in the rosary procession was Maureen Lon, who walked along praying with four of her children, including her 15-year-old son Christian, who has a rare genetic disorder. Lon, a member of Mother Seton Parish, said her son has been a great blessing to her family. “He’s always the one who calls us back (to being) a family. He’s a sign of sacrificial, suffering love. Whatever we might be going through, he puts it all in perspective.”

She said they had participated in the rosary procession “to show (people) not to be afraid with whatever God sends your way.”

The marchers who knelt to pray near the abortion clinic, which is located not far from a neighborhood ice cream stand, included Amanda Williams, who pushed her nine and one-half month old daughter Amilee in a stroller. As the mother knelt to pray beside the stroller, she held a white rosary which the baby also held in her little fingers.

“I live right over there, this is essentially my back yard,” said Williams, a Germantown resident. “The fact that late-term abortions (are being performed) here is appalling.”

The mother said she believes that “prayer can bring an end to this.” Of her baby daughter, she said, “I want her to know she is loved, and God is love, and as long as she has Jesus in her heart, she can do anything.”

The marchers also included Jose Felix Hernandez, a member of St. Martin of Tours Parish in Gaithersburg, who walked along wearing an orthopedic boot after fracturing his ankle playing soccer on Memorial Day. He said his participation was a way “to make a little penance for healing and mercy … The Lord hears the prayers.”

Afterward, Lopicollo said the marchers, who also prayed the Chaplet of Divine Mercy, offered an inspiring witness for the dignity of life.