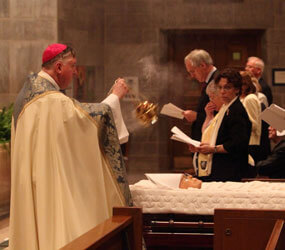 When Deacon Richard Novak was preparing to become a deacon, meeting Archbishop William D. Borders for a formal face-to-face “call to holy orders” was one of the most nerve-wracking parts of his formation.

“But as soon as I sat down in his office, I felt completely comfortable,” remembered Deacon Novak, who ministers at the Catholic Community of St. Michael and St. Patrick in Fells Point. “He relaxed you so much. He was just real easy to talk to. I don’t know anyone who didn’t think the world of him.”

Deacon Novak was one of hundreds of Catholics who paid their respect to the late 13th Archbishop of Baltimore April 22 at the Cathedral of Mary Our Queen in Homeland. The archbishop died April 19 at age 96 after a battle with colon cancer.

As a harpist filled the cathedral with otherworldly music, mourners slowly filed past Archbishop Borders’ open casket. Many paused in prayer, making the Sign of the Cross and sometimes brushing away tears.

Archbishop Borders wore a miter, liturgical vestments and his familiar glasses. His wooden crosier stood at the front of the sanctuary near a folded American flag and military honors the archbishop had earned for his service as an Army chaplain during the Second World War.

In his homily, Monsignor G. Michael Schleupner said Archbishop Borders saw himself as “one with others.”

“Not above, not beyond and not better,” said the pastor of St. Margaret in Bel Air, “but as one with each and every person he met. There was no pretense with him.”

Monsignor Schleupner, who worked closely with Archbishop Borders at the Catholic Center in Baltimore, remembered that his friend was well known for serving a cup of split-pea soup and a tuna-salad sandwich whenever he met with people – no matter if they were the mayor of Baltimore or a parish priest.
“He lived simply and was a great example to us,” Monsignor Schleupner said.

Monsignor Schleupner said Archbishop Borders maintained a positive attitude even as he suffered physical pain. He was a “shepherding bishop” who called others to leadership in the church, the pastor said.

“Archbishop Borders had the remarkable sense that priesthood is most ennobled when it is enabling,” Monsignor Schleupner said.

At the end of the service, Mercy Sister Mary Aquin O’Neill told The Catholic Review that Archbishop Borders was always encouraging. The professor at Baltimore’s Mount St. Agnes Theological Center for Women recalled advising the archbishop as part of a taskforce that looked at women’s concerns.

“I know we gave him heartburn sometimes,” Sister Mary said with a laugh, “but he never gave it back to us.”

Sister Mary noted that in addition to promoting women to leadership roles, the archbishop added all the names of women religious to the annual Archdiocesan Directory. In the past, only the name of each religious order’s superior was listed – followed by the number of women in the order.

“He wanted to go as far as he could at the time,” she said.

Despite never meeting Archbishop Borders, Edi Stewart drove down from Frederick to pay her respects.

“So many priests take a beating these days,” said the parishioner of St. Katharine Drexel in Frederick. “I want to be here to say, ‘This is God’s Church.’ I want to honor our priests and bishops for the tremendous things they do.”

For those who got to know him, like Deacon Novak, the archbishop was a man worth encountering. Deacon Novak recalled the day of wasted nervous energy when he worried about meeting the archbishop. He looked forward to reuniting with his mentor.

“He’s got a place in heaven,” Deacon Novak said, “and I hope I can sit next to him one day.”
Archbishop Borders’ funeral will be held April 23 at 1 p.m. at the Cathedral of Mary Our Queen.