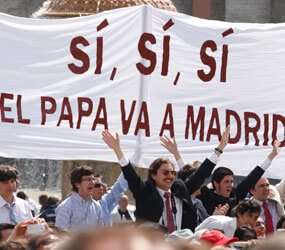 VATICAN CITY – When Jesus asked his disciples to stay awake while he prayed in the Garden of Gethsemane, he was asking every believer throughout history to remain awake to the reality of God and to the reality of sin, Pope Benedict XVI said.

Jesus’ request that his disciples keep watch was “a permanent message for all times because the drowsiness of his disciples was not just a problem in that moment; it is a problem throughout history,” the pope said April 20.

Explaining the liturgies of Holy Week and Easter to an estimated 13,000 people gathered in St. Peter’s Square, Pope Benedict said the drowsiness that Jesus warns all believers against is “a certain insensitivity of the soul to the power of evil, insensitivity to all the evil in the world; we don’t want to let ourselves be too bothered by these things. We want to forget them or we try to think they aren’t so serious.”

“This is our real drowsiness,” the pope said. “We don’t feel God’s presence, it would disturb us,” so we “stay on the path of our own comfort.”

“We must also stay vigilant in order to do good, to struggle on behalf of the force of goodness,” Pope Benedict said.

Unlike Jesus, whose humanity allowed him to experience suffering and anguish at the thought of suffering and death, but whose obedience led him to accept God’s will completely, the pope said, most people “struggle against God’s will,” thinking it will lead them into slavery.

The Holy Week and Easter liturgies, which culminate in the proclamation of Christ’s resurrection, are a clear reminder that true life and freedom come from doing God’s will, the pope said.

Pope Benedict prayed that Catholics everywhere would experience the Holy Week and Easter services as moments to reaffirm their own commitment to doing God’s will, “aware that in doing so – even when it seems hard and in contrast to our own desires – we find precisely that which truly is good for us, the path to life.”

Among those at the audience were more than 3,000 students from more than 200 universities participating in the Opus Dei-run UNIV conference and pilgrimage.
The pope told the students, “I hope these days in Rome will be an opportunity to rediscover the person of Christ and will give you a strong experience of church so that you can return home enlivened with a desire to witness to the mercy of the heavenly Father.”

The text of the pope’s audience remarks in English will be posted online at: www.vatican.va/holy_father/benedict_xvi/audiences/2011/documents/hf_ben-xvi_aud_20110420_en.html.

The text of the pope’s audience remarks in Spanish will be posted online at: www.vatican.va/holy_father/benedict_xvi/audiences/2011/documents/hf_ben-xvi_aud_20110420_sp.html.