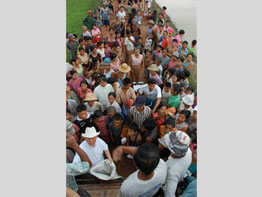 WASHINGTON – The majority of citizens of Myanmar are Buddhist, but that’s not stopping Catholics and Muslims in Miami from trying to help them.

Catholics and Muslims in south Florida – two faith groups who have not worked together this way before – have joined forces to raise money to aid people in Myanmar in the aftermath of Cyclone Nargis.

Some are describing the effort as historic.

“It’s huge, especially in this moment where there has been interfaith tension; it’s a sign to the world that people of all faiths can come together to help when it’s needed and look past dogmatic differences and focus on human suffering,” said Gloria Luna, director of social advocacy for the Archdiocese of Miami.

At a press conference June 11, representatives of the Archdiocese of Miami and the Muslim community of Miami announced they had raised $21,700 so far to help aid Myanmar, and more money was still coming in from five more Islamic centers in the area. A collection was taken up in Catholic parishes.

Shortly after Cyclone Nargis hit Myanmar, representatives from the Islamic community and the Archdiocese of Miami got together to raise money to be donated to those affected by the storm.

The May 3 cyclone left 78,000 dead and another 56,000 people missing, according to aid agencies. The United Nations said at least 2.4 million people are in need of food, clean water, shelter and clothing.

Until June 10, the country’s military junta would not give access to aid agencies to help the people of Myanmar.

All the money raised in south Florida will go directly to Catholic agencies that were already working in that country prior to the storm.

The joint Catholic-Muslim fundraising effort was well received by the people of south Florida, according to organizers. There was significant local media coverage, including multiple reports by television stations.

Khalid Mirza, of the Miami Gardens Mosque in Miami, explained how the fundraising idea developed in a phone interview with Catholic News Service. He and some friends were enjoying some coffee at Mr. Mirza’s house when they decided they had to do something for Myanmar. The following day they contacted the archdiocese.

“We were already approved to take up collections” at parishes,” said Ms. Luna. “It was a beautiful opportunity.”