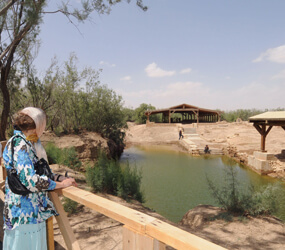 AMMAN, Jordan – For some Muslim and Catholic analysts, the papal visit to Jordan May 8-11 could spark a renewal of interreligious relations.

“He’s coming after Sept. 11, after the American invasion of Iraq – so many things have changed in the area (Middle East),” said Farouq Jarar, acting director of the Royal Aal al-Bayt Institute for Islamic Thought in Amman. “Understanding among Muslims and Christians is much more important now than at any time before.”

The institute, founded in 1980, is an international organization that uses research and conferences to help clarify misconceptions about Islam and to spread the true image of Islam today.

Jarar said he hopes the pope’s visit will be “a new start, a new bridge for better understanding, better coexistence, more respect and more acceptance.”

“I think his visit will send a strong message to all Muslims, especially after the speech in Germany,” Jarar said, in reference to Pope Benedict’s 2006 speech in Regensburg, which sparked protests from Muslims around the world. Most of the Muslim criticism focused on the pope’s quotation of a medieval Byzantine emperor, who said, “Show me just what Mohammed brought that was new, and there you will find things only evil and inhuman such as his command to spread by the sword the faith he preached.” The pope later clarified that he was not agreeing with the emperor’s words.

“This (visit) will give another side of the coin, and it will be a much better message for Muslims in general and for Arabs in particular,” Jarar said.

“We think that when the pope understands the issues well, it is something great for humanity, because he’s a very influential man. Hopefully, he could be very effective in changing things for the better,” Jarar said.

Following his visit to Jordan, Pope Benedict will travel to Jerusalem May 11. Jarar also expressed hope that the pope “will help in pushing the peace process toward achieving peace in the area and settling the conflict and availing all those concerned of their lawful, legitimate rights.”

This papal visit “is considered a new horizon of collaboration of relations between Muslims and Christians, not only in Jordan, but in all the world,” said Father Rif’at Bader, who is responsible for managing media relations for the pope’s visit to Jordan.

“It is a great pride for us that (Pope Benedict’s visit) will launch a new era,” Father Bader said. “We’re looking forward to renewing the relations between the church and the states and the world, especially after his visit to Turkey when he visited (a) mosque for the first time.

“Now we are looking forward to his visit to the mosque in Jordan,” Father Bader said of Pope Benedict’s May 9 visit to Jordan’s newest and largest mosque, the King Hussein Mosque. With an area of more than 1,500 square yards, it can host 6,000 worshippers.

“What will the pope make in these moments? I think he will pray to God, a silent prayer. A pope inside of a mosque – it is a sign of mutual respect. So it is just to be there, without saying anything,” Father Bader added.

The pope also will give a speech in front of the mosque.

“We cannot predict what the pope will say, but we can imagine that he will talk about the dialogue between Muslims and Christians,” Father Bader said.

He said Muslims would “hear from the pope himself here that there is respect, that the Catholic Church is always with the dialogue, which is a strategy that will not change.”

Christians in Jordan, who represent just 3 percent of the population, have a good presence in society, Father Bader said, adding, “We don’t focus on the numbers; we focus on the presence.”

Father Imad Alamat, who heads the committee responsible for preparing liturgical texts for the papal visit, sees the visit as giving the region “a new vision.”

“The pope will give the relations between Christians and Muslims in Jordan a new vision and give it the power to keep going forward. For us (Muslims and Christians), we have very good relationships in Jordan, but his visit will help us to continue forward.”

“The pope is coming at a time when we have a lot of confusion and conflicts in the region, so he’s coming to give us a little bit of peace. Because we need peace in this region, and he’s a peacemaker,” said Father Alamat.

Father Ala Alamat, who is related to Father Imad Alamat, is a parish priest in Zarka, about 20 miles south of Amman. He said that during the May 10 Mass in the Amman soccer stadium 25 children from his parish will make their first Communion.

“We are really very excited to see him pray with us and praying for us,” said Father Ala Alamat.

Sister Caroline Shara, a Chaldean Catholic member of the Daughters of the Sacred Heart, said the papal visit to Jordan “will be a time of great blessing for me.”

A native of Baghdad, Iraq, Sister Shara has been in Amman for seven months serving Jordan’s Iraqi refugee population, which totals between 500,000 and 750,000, according to the U.N. High Commissioner for Refugees. Many refugees are asking her to obtain tickets for them for the papal Mass at Amman’s soccer stadium.

“Even Muslims want to see the pope,” she said.

“I wish, I hope, for the Holy Father to visit my country, but it’s not a good time for a visit now,” Sister Shara said, explaining that many of the horrors she witnessed in Iraq are still vivid in her mind. “Even though I am a religious, the pope’s visit will help to give me the strength and power to continue my walk with the Lord.”