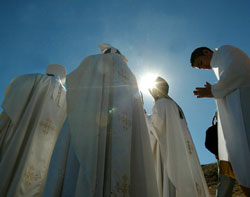 LAREDO, Texas – The travelers they came out to represent commonly move from one place to another on foot, so nearly 200 people in Laredo took to the streets and walked in observance of the Day of the Migrant (“Dia del Migrante”) Jan. 13.

The local observance of the international event began on the steps of Laredo’s San Agustin Cathedral, just a block from the Rio Grande, the natural boundary that separates Texas and Mexico. The march followed on the heels of the Texas-Mexican border bishops’ meeting held the previous day in Laredo.

A similar group from Nuevo Laredo, Mexico, began walking from the other direction. The two groups met for a balloon release, converging on the Convent Street bridge that joins the two countries. A Mass celebrated by the Texas and Mexican bishops followed on the banks of the Mexican side of the Rio Grande.

“We’re here to pray for all persons who come to the U.S. to get a better life,” said Imelda Guzman, who came to the event with her husband, Rafael, and their four children.

She and her immediate family are all U.S. citizens living in Laredo, but some of her in-laws and friends have traveled back and forth across the border without documentation.

“I have friends whose parents have died in Mexico and they can’t go to the funeral because their families are here and they can’t get back here if they go,” she told a reporter from the South Texas Catholic, newspaper of the neighboring Diocese of Corpus Christi.

The impact current U.S. immigration law has on families and the church’s position on the dignity of the human person were concerns shared by many of the pilgrims.

In a processionlike manner, the peaceful march made its way to the bridge and paused along the route several times as various speakers read a Scripture verse, followed by a brief reflection.

Guzman has encountered people who crossed into Texas from Mexico and have been abused by the coyotes paid to smuggle them across the border.

The ability to have a better lifestyle in Mexico and other Latin American countries would deter many from fleeing their homeland, Guzman said, but until then people will continue to do what they feel they have to do to provide for themselves and their families.

“So, we are here to pray for both sides so God can change their hearts. He is the only one who can do that,” she added.

Sister Anne Miriam Landolt, a member of the School Sisters of Notre Dame, lives in Rio Grande City in the Texas border Diocese of Brownsville and joined the march with members of her religious congregation who serve in Laredo and in McAllen, also in the Brownsville Diocese.

“All of us have direct or indirect contact with immigrants,” said Sister Landolt, a hospital chaplain who also facilitates small Christian communities at Immaculate Conception Parish in Rio Grande City.

After spending 12 years as a missionary in Honduras, she has experienced immigration concerns from both sides of the border. “I saw the reason why they sometimes needed to leave,” she said.

The role she sees the church playing is in awareness and education and “somehow just being vocal about immigration and the right to immigrate.”

Tony Juarez walked with her husband, Beto, a retired history professor. The couple belong to San Martin de Porres Parish in Laredo, and Tony, a retired educator, recalled the days of marching with Cesar Chavez in the 1970s when her husband was one of the first three Chicano professors at the University of California at Davis.

She said she wished the crowds that come out for immigration awareness were as big as the ones that marched for farmworkers’ rights.

The Juarezes now spend much of their retirement speaking publicly about the church’s position on immigration and the dignity of the human person. She said there are many misconceptions, even in her own community, about the people who cross the river.

“Not every Mexican who comes here wants to stay,” said Juarez. “They just want to work for a while and go back home.” She said she hopes the concept of legally hiring undocumented immigrants as contract workers will be explored.

Maria de Jesus Gonzalez hurriedly walked past the crowd on a pedestrian walkway next to the procession, which by the time it reached the bridge filled one of the two lanes of traffic flowing toward Mexico. A small child held her hand and she stopped to ask Tony Juarez the meaning of the march.

When she heard that it was to recognize migrant people, it evoked an emotional response.

“There is a lot of hatred toward immigrants,” said Gonzalez, a Mexican national living legally in Laredo. She fears the negative attitude that even the youngest children are picking up toward people migrating to the U.S.

“They are just people working, not doing anything wrong,” she said as her voice began to crack.

As director of religious education for the Laredo Diocese, Reynaldo Montemayor, said his presence at the march was “a commitment of solidarity with my brothers and sisters in the church.”

He acknowledged that countries have the right to defend their borders but not at the expense of treating persons inhumanely. Montemayor, a native of Laredo, has been active in the church community all his life. He knows that many active Catholics in Laredo parishes probably have irregular status in the eyes of the government, “but we won’t close our churches to them.”

Bishop Faustino Armendariz Jimenez of Matamoras, Mexico, just across the river from the Brownsville Diocese, said the march “is an important sign of solidarity with the immigrants and the ones who support and help the immigrant.”

He added, “We are all immigrants on a pilgrimage” and “we need to make it known that we should construct bridges instead of walls.”