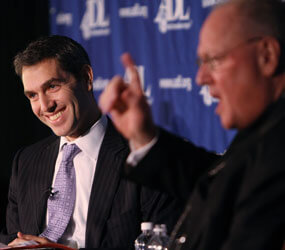 NEW YORK – Catholics and Jews can most effectively capitalize on five decades of progress in their relations by joining forces to promote religious freedom, defend immigrants, face a common threat from fanatics and advocate for civility in politics and society, said New York Archbishop Timothy M. Dolan.

He addressed more than 250 Jewish leaders assembled in New York Nov. 3 for the annual meeting of the Anti-Defamation League, an organization that fights anti-Semitism.

Reflecting on the current state and future of Catholic-Jewish relations, Archbishop Dolan said both groups must “continue to rejoice in how far we’ve come,” but not take the progress for granted. He dated the beginning of positive change to “Nostra Aetate,” the Second Vatican Council’s declaration on relations with non-Christian religions.

He said “Nostra Aetate” was “one of the most enlightened documents” of the council and it “set the bar high.”

It also opened the door to unprecedented visits to synagogues and Israel by Popes John Paul II and Benedict XVI. “To have the man we call the vicar of Christ go to a synagogue is of earthquake proportions,” Archbishop Dolan said.

Archbishop Dolan said Pope Benedict’s Oct. 27 meeting in Assisi, Italy, with leaders of other faiths could not have happened 50 years ago.

Among “areas that call for rejoicing,” Archbishop Dolan said, is that both groups have grown in sensitivity to one another since Vatican II.

One of the characteristics of progress is the willingness to speak candidly about issues that cause “tension and neuralgia,” including Pope Pius XII; Holocaust denier British Bishop Richard Williamson, a member of the traditionalist Society of St. Pius X; and the wording of prayers offered on Good Friday for the well-being of the Jews.

Archbishop Dolan said progress and friendship that began at the local level have now been institutionalized in both faiths. He cited the Catholic-Jewish dialogues that take place through the Holy See and the U.S. Conference of Catholic Bishops, which the archbishop heads as president.

Going forward, Archbishop Dolan said Catholics and Jews should work together for religious freedom. He warned of “possible movement by the government that would dangerously tread on issues of conscience and religion that our two families hold very dear.”

“Internationally, all believers are in the crosshairs of fanatics around the world. Somewhere, someplace, somebody’s being persecuted to the point of blood because of their faith and we need to stand together in defense of those people,” he said, to applause.

He said it is time for both faith groups to “face realistically the common threat we have from fanatics, especially in the Islamist community.”

Stressing that fanatics do not represent “pure, noble Islam,” Archbishop Dolan said, “It would take an ostrich not to see that religious fanatics have in their cross hairs Jews and Catholics. Perhaps you and I are going to be drawn closer together as we defend each other, as we try very creatively and energetically to reach out to moderate Islamic leaders to build mutual defense of religious rights.”

Archbishop Dolan said Catholics and Jews must be united in defense of immigrants.

Both Jews and Catholics are the children, grandchildren and great-grandchildren of immigrants, many of whom came to the United States to escape religious persecution. When they arrived, they carried little more than “the pearl of great price: their religion,” he said.

Archbishop Dolan said both groups have been on the receiving end of religious bigotry and could stand together as advocates for the return of civility to politics and religion.

Catholics and Jews share pastoral concerns that reflect the daily lives of their people, Archbishop Dolan said. They include raising children in the faith, seeing children and grandchildren marry outside the faith, and the “severe hemorrhage of young people” away from the faith.

Asked about Vatican relations with Israel, Archbishop Dolan said, “The Holy See has a strong tradition of defense of sacred sites and certain Palestinian prerogatives.”

“The Holy See is a good friend of Israel and has taken a judicious, centrist approach, with credibility on both sides.”

They agreed that contact between people of the two faiths reduces tension and increases understanding. They said there has been a growth in sensitivity between those Archbishop Dolan called “meat and potatoes Catholics” and those referred to as “Jews in the pews” by Rabbi Cosgrove.

Rabbi Cosgrove cited a survey by the Anti-Defamation League that showed Hispanic Americans born outside the U.S. are twice as likely as those born in the U.S. to hold anti-Semitic views. He asked Archbishop Dolan if the Catholic Church could foster sensitivity among young Hispanics.

Archbishop Dolan said children in Catholic schools and religious education programs receive “accurate, truthful instruction (about the Jewish community) with tender sensitivity.” With respect to Hispanic immigrants, “it’s not so much that we’re not training and forming them in Jewish-Catholic dialogue, we’re stumbling on catechizing them at all,” he said.

Only 4 percent of Hispanics Catholics attend Catholic schools, according to Archbishop Dolan. He added, “As we get more aggressive in educating our children for our own reasons,” the results will be good for the Jews, as well.