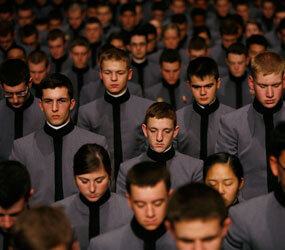 WASHINGTON – Catholic groups with a stake in matters of war and peace were alternately hopeful and dejected by President Barack Obama’s plan to add 30,000 troops to the war effort in Afghanistan.

“I think he’s making a tragic and horrible mistake,” David Robinson, head of Pax Christi USA, said of Obama during a Dec. 2 telephone interview with Catholic News Service from Pax Christi headquarters in Erie, Pa. “The irony of him announcing this fateful escalation the week before (Obama accepts) the Nobel Peace Prize, this is Greek tragedy.”

“We hope and pray for his success, that his strategy works,” said Maryknoll Sister Mary Ellen Gallagher, who is on the staff of the Maryknoll Office for Global Concerns in Maryknoll, N.Y.

Obama outlined his war plans in a Dec. 1 address at the U.S. Military Academy in West Point, N.Y. Broadcast across the nation, Obama said he would add 30,000 soldiers to the effort, but also announced the withdrawal of troops beginning in July 2011 in the expectation that the Afghan government would be able to accept the added responsibility.

“It appears to me that our military is in need of that help there,” said Jose Garcia, national executive director of Catholic War Veterans of the USA.

Talking to CNS during a Dec. 2 telephone interview from Austin, Texas, Garcia said, “My biggest concern at this point is that I don’t want it to become another Vietnam. Being a Vietnam veteran, I know what happened. Over there, we kept sending in more military and it became a never-ending situation.”

Garcia served a one-year tour of duty in Vietnam that ended in 1973, when the last U.S. fighting forces were withdrawn.

A 35-year Army veteran, now retired, Garcia said, “We started it. We need to finish what we start.”

“I was very glad to hear the president give an exit timeline for Afghanistan,” Pax Christi’s Robinson said. “I just don’t agree that we’re going to be able to make enough of a difference on the ground in the next 18 months that will put us in a better position to leave then than we are now.”

Robinson added, “War is not going to change the dynamic. They’re not going to be able to … in the 12-month time frame that the president gave them … create a corrupt-free Afghan government, double the size of the Afghan military and engage Pakistan in a productive manner when none of that had been accomplished in the last eight years.”

“Those are our concerns. We support the president. We voted for him here. He expressed himself; he’s eloquent. But as we know, war does not settle problems. We’ve seen that, we’ve seen that in our own history,” she said.

Robinson told CNS he had attended a program at the invitation of the National Security Council which solicited several groups’ views on the war, but heard little of the government’s plans in the region, war or no, citing “the struggle of trying to establish a central democratic government that is not tied to the drug trafficking trade and that respects all the stakeholders in Afghan.”

“Even if there were no war going on, the tasks of establishing a central government with authority over the whole country that’s effective, just and equitable and allowing the economic base to move out of abject poverty – those goals would be monumental,” he said.

He added, “Until a viable diplomatic and political strategy is articulated and emerges, I can’t see how any military involvement can be justified.”

Garcia, of the Catholic War Veterans, was of two minds about Obama’s announced timeline.

“His timetable for accomplishing things are fine. I think it’s going in the right direction,” Garcia told CNS. “My biggest concern is when he set a deadline of the year 2011. If I was an insurgent at that time, I would personally sit on the sideline waiting for 2011 to come, wait for the military to go home, and start all over again.”