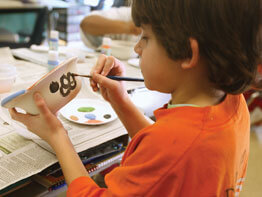 At St. John’s Catholic Prep School, students star in a film with a modern-day take on Lenten sacrifice. Simon, the top earner at a financial company, sacrifices his job so a co-worker with five children can keep his in the film, shot at the Frederick school.

At Mount St. Joseph High School, students will record reflections on the daily Scripture readings as podcasts, which will be posted on the Irvington school’s Web site.

At St. John the Evangelist in Severna Park, 30 volunteer actors will bring the Stations of the Cross to life in a theatrical production featuring Scripture, meditation and music.

Lent is almost upon us, and Catholics in the Archdiocese of Baltimore are preparing – in ways traditional and not-so-traditional – to observe the penitential season leading to the Easter resurrection of Jesus Christ.

Catholics begin the season by receiving ashes on their foreheads on Ash Wednesday, then observe Lent through Stations of the Cross, prayer, confession, parish missions, fasting, almsgiving, soups and suppers and volunteer work.

Baltimore-based Catholic Relief Services is set for its annual Lenten program, Operation Rice Bowl. Catholic parishes and schools from more than 13,000 communities participate to assist those in poverty around the world by foregoing big meals and putting savings into symbolic rice bowls. The campaign raised $7 million last year.

“Having the Rice Bowl as the focal point for their Lenten observance helps families to think beyond their daily realities and to focus on making a difference in the lives of others,” said Beth Martin, program manager for Operation Rice Bowl.

At St. John Prep, Father George I. Jakopac, director of campus ministry, came up with the idea of filming “Tales from the Light Side.”

“It’s an evangelization tool about the real living of the faith without being too preachy,” Father Jakopac said.

The kids love seeing themselves on the big screen when all 300 students at the school watch it, and the message of sacrifice for another is not lost.

Other Catholic students will be traveling on missions of charity: Delegations of students from Notre Dame Preparatory School in Towson will head to Mississippi to work on a house for Habitat for Humanity and to El Salvador to experience living in an impoverished community.

On a lighter note, for Lent with a new bent, Dr. Seuss will be put to good use.

Children at St. John Regional Catholic School in Frederick will visit stations featuring his books, with biblical twists and activities.

When they encounter the book “One Fish, Two Fish, Red Fish, Blue Fish,” students will play a fishing game and ponder Jesus’ words: “Follow me, and I will make you fishers of men.”

And at St. Joseph School in Fullerton, 4-year-olds will visit the Stations of the Cross, then use sand to retell the story to classmates and parents.

St. Matthew, Northwood, a melting pot of a parish with members from more than 40 countries, brings a decidedly international and ecumenical spirit to Lent. The parish will join other area Christian churches in multicultural Lenten observances.

“The whole season is a season of reconciliation and forgiveness and renewal,” said Father Joseph L. Muth Jr., pastor of St. Matthew. “We try to confront ourselves with our own human conditions and how we are called to accept that and work with that so we can be renewed in the spirit of the Lord.”

At the Church of the Holy Apostles, Gambrills, seniors will devote Lenten prayers to saving the lives of unborn children.

Gisela Barry, pastoral assistant for seniors and Bible study, said each senior will pray that an unborn child becomes a priest or religious.

“To be committed to prayer – this is how it ties in with Lent – is really a sacrifice with all the diversion that we have going on,” Ms. Barry said. “So we’re getting away from giving up. It’s more doing – doing something extra for Lent.”

And, she said, trying to save babies not yet born.