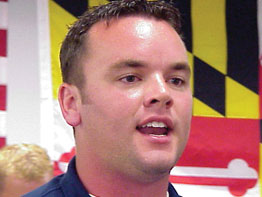 Convinced that a bill introduced last week in the House of Delegates would cripple the Church’s many ministries, leaders of the Archdiocese of Baltimore have launched an awareness campaign aimed at educating Catholics about the legislation’s impact on parishes, schools and Catholic institutions.

House Bill 858, introduced by Del. Eric Bromwell of Baltimore County, would suspend the statute of limitations for child sexual abuse cases – creating a one-year window during which individuals claiming to be sexually abused as children could file civil suits against the perpetrator and private institutions such as dioceses, parishes and schools.

The bill would allow multi-million-dollar civil lawsuits to be brought against the archdiocese, its parishes and schools for decades-old cases.

Archbishop Edwin F. O’Brien addressed the issue in a letter to all Catholics that was published in February parish bulletins, along with a question-and-answer sheet about the bill. He also discussed the issue in his Feb. 7 column in The Catholic Review.

“All of us want justice for those who were victimized as children,” said Archbishop O’Brien in his parish letter, noting that child abusers can be criminally prosecuted until the day they die. Maryland law also allows childhood victims until the age of 25 to seek monetary damages through civil suits – a timeframe that was extended by the Maryland legislature in 2003.

“To suspend the civil statute of limitations retroactively for decades-old incidents would do nothing to protect children and would not punish the guilty,” Archbishop O’Brien said. “Instead, it would do serious harm to the Church’s mission and the people whom we serve today for tragedies that occurred many decades ago.”

After California passed a similar measure, claims against the Church have totaled nearly $1.8 billion. Five dioceses have filed for bankruptcy.

The Diocese of Spokane, Wash., which filed for bankruptcy, had to eliminate its parish service office, its Catholic conference, a subsidy to Hispanic ministry affecting about 30 percent of the diocese and retreats and formation programs, according to Sean Caine, spokesman for the Archdiocese of Baltimore. The Spokane diocese also made substantial cuts in subsidies to Catholic schools and reduced the bishop’s organization by about 40 percent, he said. To fund its $48 million settlement, the Spokane diocese had to sell everything it owned and ask parishes to raise another $10 million, Mr. Caine said.

Maryland parishes, schools and other institutions would be directly affected in similar ways if Del. Bromwell’s proposal becomes law, according to area pastors.

Father Sylvester Peterka, C.M., pastor of St. Cecilia/Immaculate Conception in Baltimore, is most concerned that small, inner-city parishes like his would likely close or suffer debilitating cuts if the Church was hit with multi-million-dollar lawsuits.

“What I fear is that something that may have happened 40 or 50 years ago is going to stop the good things that are happening now,” said Father Peterka, noting that his parishes have active ministries reaching out to the poor, ex-offenders, people in recovery, homeless, youths and those with HIV/AIDS.

“If the Church goes bankrupt, churches will have to be closed, and with the closure goes the ministries,” he said. “The past hurt is creating future catastrophe for the inner city. I see it as the death knell for a lot of social justice work that is being done by the Church, particularly in the city.”

The Catholic Church is the largest private provider of social services in Maryland, according to Mr. Caine. Its schools educate more than 60,000 students, and its many hospitals and outreach programs benefit people throughout the archdiocese, he said.

Out-of-state trial lawyers are pushing the proposed law, even though parishes, schools and institutions would suffer, Mr. Caine said.

In a Feb. 7 letter to Senate President Thomas V. “Mike” Miller and House Speaker Michael Busch, the Rev. Dr. William C. Calhoun, president of the Interdenominational Ministerial Alliance, endorsed the position of the archdiocese and warned of the devastating impact the bill would have on churches.

“It is grossly unfair … to expose institutions such as faith communities to monetary lawsuits by individuals who wait decades to come forward,” he said.

“Not only does it discourage timely reporting of such claims, thereby exposing others to harm and preventing immediate accountability on the part of the perpetrator, it also has the very real potential of bankrupting our churches and eradicating the many critical ministries and resources they provide to those most in need,” he said.

Archdiocesan leaders point out that the proposed legislation treats the Church differently than public institutions. Government entities enjoy legal protections that do not apply to private organizations like the Church. For example, currently in Maryland, a child abuse victim who seeks to file a civil action against a county or municipality must give notice of the suit within six months; a claim against a local school board is limited to $100,000 in damages, Mr. Caine said. Del. Bromwell’s bill would have no impact on these special provisions.

An investigation by the Associated Press last year found 2,570 educators in the nation’s public schools whose teaching credentials were revoked, denied, surrendered or sanctioned from 2001-05 following allegations of sexual misconduct. The study found that young people were the victims in at least 1,801 of the cases. In a 2004 Education Week article, Carol Shakeshaft, a Hofstra University researcher who prepared a federal report on public school sexual abuse, said, “The scope of the problem appears to far exceed the priest abuse scandal in the Roman Catholic Church … the physical sexual abuse of students in public schools is likely more than 100 times the abuse by priests.” In spite of this data, Del. Bromwell’s bill does not address the damages caps and special deadlines that apply to suits against public entities.

Despite four telephone requests, one e-mail request and a Feb. 11 in-person visit to his Annapolis office by The Catholic Review, Del. Bromwell did not respond to requests for an interview.

In a letter published in the St. Joseph, Fullerton, bulletin Feb. 10, Father Kevin T. Schenning, pastor, said many of his parishioners have contacted the delegate with concerns about his bill. Del. Bromwell is a St. Joseph parishioner and a Calvert Hall College High School, Towson, graduate.

“Some of you, if not all, who contacted Del. Bromwell have received a response saying that the legislation does not target the Church,” said Father Schenning in his letter. “What he fails to acknowledge is that while the bill does not mention the Church specifically, it would not apply to public and governmental entities which are protected by a separate law that protects them by enforcing strict time limits and placing caps on money damages.”

Father Schenning said Del. Bromwell has “no answer to the criticism that his bill is unfair because it seeks to throw out the law books by allowing trial lawyers to file claims that are 50 or 60 years old against the accused – who is likely dead – the archdiocese, and the parish or school where it occurred.”

In an interview with The Catholic Review, Father Schenning said he recently met with Del. Bromwell for 30 minutes in Annapolis, along with Richard J. Dowling of the Maryland Catholic Conference and Alison D’Alessandro, archdiocesan director of the Office of Child and Youth Protection.

“He heard us,” Father Schenning said. “But there’s a big difference between hearing and listening. He wouldn’t budge at all.”

When asked why he is sponsoring the bill, Del. Bromwell said only that ‘it is the right thing to do,’ according to Father Schenning.

The Church is already doing the right thing for victims by providing unlimited counseling and direct financial assistance, the pastor said.

The Archdiocese of Baltimore has longstanding policies in place to protect children, according to Archbishop O’Brien. All employees and those volunteers who work with children on behalf of the Church are required to undergo safe-environment training through the STAND program, he said. Fingerprinting of employees is mandatory, and background checks are also required for both employees and volunteers. When someone who was abused comes forward, the archdiocese pays for counseling for as long as it may be needed by the victim and family members. Some cash settlements have also been made. To date, more than $6.5 million has been paid for victim counseling and direct assistance to survivors, Archbishop O’Brien said.

HB 858 is currently in the House Judiciary Committee. No hearings have been scheduled as of Feb. 12. Sen. Jim Brochin of Baltimore County, who submitted a similar bill last year, did not do so this year.

Del. Bill Frank of Baltimore County, who serves on the judiciary committee, said he believed the bill “does nothing to protect children while its passage could very likely bankrupt the archdiocese.”

“The bill unfairly targets the Church while public institutions, including public schools, are given many more protections against civil suits,” he said. “There’s no level playing field here. It’s bad public policy. It opens a window that invites a lot of false claims and could have a monumentally negative impact on the Church.”