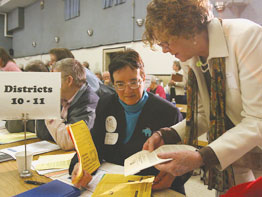 ANNAPOLIS – Catholics flexed their political muscles in a big way Feb. 18 when about 600 parishioners from across the state converged on the capitol to lobby their lawmakers on key issues related to the sanctity of life, education and social concerns.

Sponsored by the Maryland Catholic Conference, the public-policy arm of Maryland’s Catholic bishops, the 24th-annual Lobby Night was a chance for people in the pews to get to know their bishops and talk to their legislators face-to-face in the public square.

The theme for this year’s Lobby Night was “Be there for others,” and was drawn from Pope Benedict XVI’s recent encyclical, “Spe Salvi” (“Saved by Hope”).

In an opening address at St. Mary’s High School in Annapolis, Archbishop Edwin F. O’Brien said the purpose of Lobby Night was to uphold the dignity of human life, “in whatever size, in whatever form, in whatever color it comes.”

“The unborn, the sick and the elderly must always be embraced as gifts and never viewed through the lens of convenience,” said Archbishop O’Brien, adding that those in prison, women facing crisis pregnancies and immigrants must also be treated with compassion.

Addressing legislative efforts to legalize gay marriage in Maryland, the archbishop said marriage between a man and a woman “must be respected and preserved as the foundational relationship of human society.” He also spoke out against a bill that would lift the statute of limitations on decades-old child abuse civil cases, raising concerns that multimillion-dollar lawsuits could devastate important Catholic ministries.

“Our church will not sit idly by while trial lawyers seek to enact unfair and unnecessary legislation that threatens our parishes and our schools and our ministries serving the sick, the poor and the homeless,” he said. (See story on page 14.)

Richard J. Dowling, MCC executive director, told participants that his organization takes positions on approximately 7 percent of the 3,000 bills that are introduced each year. They represent a broad range of topics, he said.

For many years, Catholics have been leading advocates for ending the death penalty, Mr. Dowling said. A bill introduced this year to replace the death penalty with life sentences without parole has a very real chance of becoming law, he said.

Kirk Bloodsworth, a convert to the Catholic faith and Eastern Shore native who was the first American on death row exonerated by DNA testing, told participants that Catholics “need to stand together and show the legislators of this state we are a force to be reckoned with.” Mr. Bloodsworth said there is no guarantee that an innocent person won’t be executed.

Sister Dolores Chepiga, S.S.J., coordinator of prison outreach for the St. Vincent de Paul Society of Baltimore, said she attended Lobby Night to make sure her representatives know how strongly she feels about ending capital punishment.

“I know people on death row,” she said. “Capital punishment does nothing but teach our young people that violence is an answer to problems. We’re a civilized society. How can we favor premeditated murder?”

Maria Chapulle, a parishioner of St. Joseph in Sykesville, said her top concern was making sure lawmakers support pregnant women. The MCC is opposing a bill that would discredit crisis pregnancy centers by requiring them to state they are “not required to provide factually accurate information to clients.” The MCC is concerned that such a bill would have a “chilling effect” on women looking for help, possibly leaving them no choice but abortion.

“I think that pregnant women should receive help and not feel so desperate that they kill their babies,” said Ms. Chapulle.

After receiving briefings on legislative issues by MCC staff, participants were shuttled to legislative offices in downtown Annapolis to meet their delegates and senators.

During their meeting with Del. Steven DeBoy and Del. James E. Malone Jr. of Baltimore County, Catholics from Catonsville-area parishes were pleased that both delegates said they favored measures benefiting students and teachers in non-public schools. They include a bill to extend the Quality Teacher Incentive Tax Credit to non-public-school teachers and the creation of the BOAST Maryland Tax Credit that would give a state tax credit for business donations to organizations that support K-12 public and non-public schools. They also supported maintaining $3.6 million in the budget for non-religious textbooks and technology in non-public schools.

But the two lawmakers disagreed with the Lobby Night participants on some immigration issues and the death penalty.

Del. Malone said he could not support efforts to provide driver’s licenses to undocumented immigrants as promoted by the bishops.

“I think if you are going to come here, you should have to go through the legal process,” he said.

Del. Malone said he believed the death penalty is needed to help protect correctional officers from inmates who may try to murder them if they did not face the ultimate sanction.

“We’re starting to see more inmates kill people in the system,” he said. “Soon, no one will want to work in the correctional system. So I do believe the death penalty is a deterrent.”

Del. Todd Schuler of Baltimore County defended his position favoring same-sex marriage when his constituents raised concerns that it would hurt society and companies that would be forced to pay benefits for same-sex couples.

“I see this as an issue of fairness,” said Del. Schuler, a sponsor of same-sex marriage legislation. “I have no problem with the Catholic Church not recognizing a same-sex ceremony. But I’m concerned about the state getting involved. To me, it’s the state making those decisions that I’m not sure should be made.”

Lobby Night participants, bishops, clergy and lawmakers attended a legislative reception held during the evening. A film crew recorded their lobbying efforts for a video presentation that will be played during Pope Benedict XVI’s visit to Washington, D.C., in April.