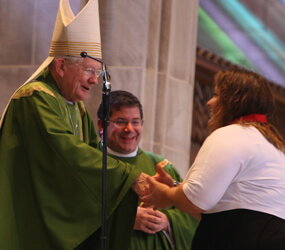 When Virginia “Ginny” Dauses arrived at St. Mary’s High School in Annapolis several years ago as campus minister, 15 of the school’s young people attended the annual March for Life in Washington.

The huge turnout is just one example of how Dauses’ effort to lift up the culture of life is bearing fruit in Annapolis. She has also established a pro-life club, encouraged participation in the “40 Days for Life” prayer campaign and initiated a “life week” at the school that educates students on issues related to abortion, embryonic stem cell research, marriage, euthanasia and more.

In recognition of Dauses’ service, Cardinal William H. Keeler presented her with the archdiocesan “Culture of Life Medal of Honor” during the Oct. 4 Respect Life Mass at the Cathedral of Mary Our Queen in Homeland.

“Speaking the truth at all times is so important to me because it’s the foundation of our faith and something that I think the youth just love,” Dauses told The Catholic Review. “They are constantly trying to seek Christ. They are completely open to the pro-life message – they recognize authenticity.”

In connection with Respect Life Sunday, several “life chains” were held throughout the archdiocese – providing participants a chance to pray peacefully for an end of abortion. Many parishes also included special prayers in support of life during their weekend liturgies.

Briah Lynch, a 17-year-old senior at IND, is active in the 25-member Respect Life Club at her school. She said it’s important to educate young people about abortion.

“We need to get the word out to teenagers that there are other options out there,” she said.

Colleen Strauch, also a 17-year-old senior at IND and club member, agreed. She is encouraged by recent polls that show a majority of Americans classify themselves as “pro-life.”

“I see more people standing up for their views,” Colleen said.

Pamphlets distributed to Mass-goers noted that in Maryland taxpayers annually spend $2.3 million for state-funded abortions and that more than 75 percent of abortions are from women who have had them before.

In his homily, Monsignor Robert Jaskot said life is under attack “from every angle,” whether through abortion, embryonic stem-cell research, euthanasia, assisted suicide and assaults on marriage.

Monsignor Jaskot noted that only one in 500 marriages ends in divorce when couples pray and read Scriptures together.

“Our culture seeks to manipulate and control God’s design,” he said. “Authentic happiness is found in those who follow God’s design.”