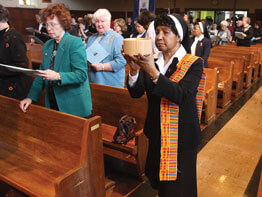 Every day, Deacon B. Curtis Turner glances at the image of Mother Mary Lange hanging on his wall at St. Frances Academy in East Baltimore and offers a prayer.

As the principal of the same school founded by Mother Lange in 1828 to educate the children of slaves and former slaves, Deacon Turner prays for Mother Lange’s intercession to help him continue her legacy.

“Each time she speaks to me, she says, ‘My dear deacon, this is what I want you to do: teach, preach and heal,’” Deacon Turner said, calling the tri-fold directive the perfect job description for anyone who ministers in the name of the Oblate Sisters of Providence.

Deacon Turner was one of about 250 people who gathered at the Oblate Sisters of Providence motherhouse in Arbutus for the “127th anniversary of the eternal life of Mother Mary Lange.” Cardinal William H. Keeler celebrated the Feb. 8 Mass.

In his homily, Deacon Turner said Mother Lange showed a “single-minded devotion to her calling.” She served God no matter where he sent her and no matter the discrimination she faced as a black woman.

“The Oblate Way is all about a single-minded purpose that leads others closer to Christ,” he said.

Deacon Turner, whose office is beneath the room where Mother Lange lived, noted that for many St. Frances Academy students, their school is the only place they know as church.

“Mother Lange knew that without Christ, the disenfranchised would remain so,” he said. “Our kids have a right to hear about Jesus.”

Cardinal Keeler said the canonization cause for Mother Lange is now under consideration in Rome. He recalled that when he mentioned the good works of Mother Lange to Pope John Paul II, the late pope encouraged him to talk to leaders of the Congregation of the Saints about the canonization process. Mother Lange has already been recognized by the church as a “Servant of God.”

“Please God, in a couple years, we’ll see her beatified and then canonized,” Cardinal Keeler said, sparking sustained applause from the congregation.

At the end of the liturgy, Sister Magdala Marie Gilbert, an Oblate Sister of Providence who serves as the newly appointed Mother Lange Guild director for the canonization of Mother Mary Lange, thanked her predecessor, Sister Mary Virginie Fish. Oblate Sister Virginie stepped down after 19 years promoting Mother Lange’s cause.

Sister Virginie said she won’t rest until Mother Lange is recognized as a saint.