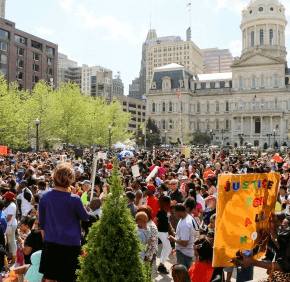 Sister Gwynette, director of the Archdiocese of Baltimore Black Catholic Ministries, said that the demonstrations over the past week related to the death of Freddie Gray Jr. were the voices of the victimized saying “enough is enough – I matter.”

“We’ve seen multiple expressions of that, and not just violence, but the thousands of young adults I know that have demonstrated peacefully,” she added.

There were easily a couple thousand at the peaceful faith rally, calling out “Amen” and “Mmm-hmm” in response to local leaders from Christian, Islamic, Jewish and Buddhist faiths. Hands joined easily and songs were sung.

“Baltimore is a place that’s always been really close in my heart,” said Rev. Inryu Ponce-Barger, a Buddhist priest of the Zen discipline from Washington, D.C.

“Seeing what has transpired here over the past two weeks,” she added, “there’s an opportunity to raise up the focus on how people in poverty are really suffering.”

“I’m a person of hope,” she said. “Our challenge is to translate that into concrete actions so our young people feel hope. The question is will we seize the moment. The answer is yet before us.”

Some have already answered yes.

“The religious congregations are beginning to ask themselves again, what is needed for the poor,” Sister Gwynette said.

The Oblate Sisters of Providence, founded as the first Roman Catholic religious congregation of women of African descent, brought a presence to the rally.

“We want a united Baltimore.”

“Our community has always had a strong commitment to peace through non-violence,” she said, “and we recognize that there are many causes for violent responses.”

“We’re with people in prayer, looking for responses that go so far beyond this to deal with basic inequality,” Sister Joan added.

Every day parishes in the Archdiocese of Baltimore have responded as well.

The bishop noted that statistics in the Sandtown-Winchester neighborhood – where Gray lived and much of the rioting after his April 27 funeral occurred – paint a dire picture, with unemployment, he said, “really over 60 percent.”

“For the people who are working, the overwhelming majority have to travel at least 45 minutes from their homes,” Bishop Madden added. “That tells you there are no jobs in the community.

“People no longer have to wring their hands and say, ‘What can we do?’ I think it’s perfectly clear what we can do.”

“What we have to do is come together and look at how we can bring about change, particularly in those communities where the voices of the poor and marginalized are oftentimes not heard,” said Sister of Notre Dame de Namur Patricia Chappell, executive director of Pax Christi USA and co-chair of her order’s national anti-racism team.

Also looking for solutions is the Racial Justice Circle, a group operating within Call to Action Maryland, a Catholic social justice organization.

“It’s a circle we want to continuously get bigger,” said Ryan Sattler, who co-chairs the group with his wife, Joan.

The Racial Justice Circle grew out of a June 2014 mini-symposium, Planting the Seeds of Racial Justice, hosted at St. Matthew, Northwood. Presenters included Father Joseph Muth of St. Matthew; Father Donald Sterling of New All Saints in Liberty Heights, both of whom attended the faith rally, and Father Warren Savage of the Diocese of Springfield, Massachusetts.

The event was so thought-provoking, said Sattler – a parishioner of St. Matthew – that the group is trying to keep the conversation going, with 25-30 individuals from 10 archdiocese parishes participating.

Pastor Jamal Bryant of the Empowerment Temple, located in West Baltimore, kept to the One Baltimore theme.

“I wish you could see what it is that I see at this moment,” he said, looking out over the assembled as he closed the rally. “Baltimore has come together. This is what I thought we would never see in our lifetime.”

Governor joins archbishop in Sandtown-Winchester to pray for peace