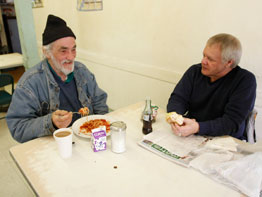 WASHINGTON – Seventy-fifth anniversary or not, lunch still must be served at the New York Catholic Worker’s Maryhouse. Hungry people will be waiting, as they are every Ms. Day.

Jane Sammon knows the routine: hospitality, meals, conversation, responding in whatever way possible to people in need. She’s been at Maryhouse for nearly 36 years, arriving in the summer of 1972 from Cleveland to live a life of voluntary poverty and personal sacrifice with a deep commitment to the works of mercy. It’s a way of life many admire but few venture to try.

Maryhouse is a place where the world is made better for people “little by little,” as Catholic Worker co-founder Dorothy Day often would say, recalling the example of St. Therese, the Little Flower of Jesus. It’s a place where people are readily welcomed and their human dignity is uplifted. Ms. Day wanted a place where Christ would feel at home.

“It’s an amazing thing that really has very little to do with us,” said Ms. Sammon, 60. “It’s the grace of God that keeps us going.”

Maryhouse on East Third Street in New York’s Bowery and St. Joseph House two blocks away on East First Street are the flagship communities of the Catholic Worker Movement, which turns 75 May 1. The movement toMs. Day encompasses more than 180 houses of hospitality in the United States including a few small farms. Another 18 houses are in Canada, Mexico, Belgium, Germany, Great Britain, Netherlands, Sweden and New Zealand.

Over the years, the movement has grown considerably, with the number of houses doubling since Ms. Day’s Nov. 29, 1980, death. The notion that the movement would founder once the hard-driving Ms. Day passed away has long since been dispelled.

Author Jim Forest, who worked alongside Ms. Day in New York in the 1960s and 1970s and has written extensively about her life, relates a story reflecting her view about the movement’s future. Asked in 1973 if she thought the movement would survive her, Ms. Day answered, “Why shouldn’t it? It has already survived more than 40 years of me.”

The movement was born on the streets of Depression-laden New York City May 1, 1933, when Ms. Day and friend Peter Maurin published and sold – at a penny a copy, the price it’s still going for today – The Catholic Worker, a newspaper focusing on the social teachings of the church and advocating for the poor and displaced workers. As circulation grew rapidly it took just six months for Ms. Day and Maurin to establish the first Catholic Worker house of hospitality in a walk-up apartment with space for 10 homeless women. The movement grew quickly in Manhattan and spread across the country.

Today, Catholic Worker houses are as diverse as the people running them. Each house is autonomous with no formal rules except to carry out the works of mercy: feeding the hungry, sheltering the homeless, caring for the sick, burying the dead.

The depth of prayer and spirituality varies as well. Some community members walk in lock step with the Catholic Church while, as Mr. Forest said, “others would cross the street to not be blessed by the pope.” The vast majority are somewhere in the middle.

Hospitality takes many forms, from storefront drop-in centers to comfortable places for people to lay their heads at night. Some communities welcome people with AIDS or HIV. Others accept single mothers and their children or homeless men, many facing addictions or mental illness.

In Stillwater, Minn., Solanus Casey House welcomes homeless mothers and their children in two restored 19th-century houses. “It’s an utterly ordinary thing we do,” house founder Tom Loome told the National Catholic Prayer Breakfast in Washington April 18. “It is called Christianity. It is not original what we do. At least we hope it’s not original.”

“Social workers are not in the business of passing out love. That’s where communities like ours come in,” Mr. Loome said.

“So many of the traditional works of mercy have been institutionalized and taken over by professionals or by the government. We don’t simply direct them to the county to stand in line and get a number. To do it personally, that’s Dorothy Day’s philosophy of personalism.”

It’s the philosophy of personalism – taking personal responsibility for someone in need – that guides each Catholic Worker community.

Joe May Sr., a Catholic Worker who helps run the Peter Maurin Center in Akron, Ohio, said being in touch directly with the people being served has its benefits. “You don’t have bureaucracy,” he said, citing his community’s focus on welcoming Hispanic mothers and their children in three houses of hospitality. “We have to find out from the people what is needed. Before we say what we’re going to do, we ask what is needed.”

Art Laffin of Dorothy Ms. Day Catholic Worker in Washington said community members not only provide hospitality, but also feel called to be witnesses of the nonviolent Christ through weekly vigils at the White House and the Pentagon. The call to resist violence and promote justice and peace is widespread throughout the movement.

“The Catholic Worker has continued because people believe that it’s an authentic expression of faithfulness and the Gospel of Jesus, who calls us to work for justice and peace, to intercede for the victims and to be their voice,” Laffin said.

Catholic Workers like Ms. Sammon say the work can be done by anyone – Christian or otherwise – who understands the call to be merciful.

“You don’t need a Catholic Worker to do what we’re doing,” Ms. Sammon said.

To commemorate the founding of the Catholic Worker Movement, Marquette University Press has published a compilation of Dorothy Day’s personal diaries from 1934 until her death in 1980. “The Duty of Delight: The Diaries of Dorothy Day” costs $42 and is available by calling: (800) 247-6553, or online at: www.marquette.edu.mupress.