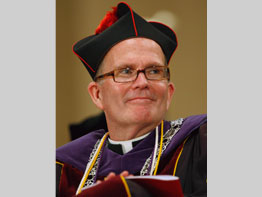 BALTIMORE – The Catholic University of America has had a record-breaking year for freshman enrollment and for national fundraising, its president, Vincentian Father David M. O’Connell, reported Nov. 10 to the U.S. Conference of Catholic Bishops.

The annual national collection for the university raised nearly $6 million, he said, the largest such collection in the school’s history.

Including the $6 million, the university raised $26 million, making “this past year the best fundraising year in history,” Father O’Connell told the U.S. bishops gathered in Baltimore for their annual fall general meeting.

Besides the collection enabling the school to fund financial aid and other scholarships, the collection itself serves as a promotional tool for the university, he said.

With the collection taken up in 160 dioceses, he said, “people hear about the … university because of the collection who might not otherwise know or learn of us.”

Toward the end of his remarks, Father O’Connell also reported to the bishops the nation’s current financial crisis has hurt the university’s endowment, which he said dropped in October from a record $227 million to $144 million before going back up to the current total of $157 million.

But he said the school is “carefully monitoring” the situation and taking steps “to face the coming year prudently.”

On other topics, Father O’Connell reported on plans to open a residence for student priests at the university, to accommodate about 30 students starting this summer, and on a vocations discernment program. He said in the 11 years he has been at the university, 80 men and 30 women have “responded to God’s call,” and dozens more are in the discernment groups.

Also, the third new campus residence hall in a decade will open in January.

He said Pope Benedict XVI’s April visit to campus was the highlight of his 11 years as president “and remains a source of incredible joy to the university community, especially the students.”

“The Holy Father’s speech was extraordinary, as you know, but we felt a special pride in the fact that Pope Benedict chose Catholic University as his pulpit to address the church in our country on the topic of Catholic education,” Father O’Connell said.

The priest said the address was a reminder to him of the role Catholic University “has played historically and should continue to play for the church, especially within the Catholic academic community: one of unambiguous fidelity to Catholic identity and mission – and what can happen as a result of that fidelity.”

Father O’Connell also told the bishops the far less cheerful news of the effects on the school of the crisis in financial institutions, shrinking its investments by $83 million in a matter of weeks.

The university’s endowment, which had grown from $39 million when he first came to Catholic University in 1998, stood at a record $227 million this past June, he said.

“Then came October,” Father O’Connell said. “We dropped as low as $144 million and have bounced back to a current status of $157 million.”

“These are difficult times for all of us. The university is carefully monitoring this situation as well as our fundraising efforts and is taking steps necessary to face the coming year prudently, with an eye to the future,” he said.