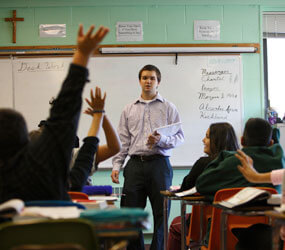 WASHINGTON – Creighton University has initiated a new program to help meet the need U.S. Catholic schools say they have for qualified religion teachers.

A recent national survey about religion teacher preparation conducted by Creighton found that a majority of Catholic high school administrators said there are not enough qualified religion teacher candidates to meet the need their schools currently have for such teachers.

“The Next Generation: A Study of Catholic High School Religion Teachers,” which involved 1,089 teachers at 195 Catholic high schools selected at random from across the nation, found that Catholic high school religion teachers are less qualified than other public and private school teachers in terms of academic preparation, pedagogical training and teaching experience.

The study also found that today 40 percent of full-time religion teachers had a master’s degree in theology/religious studies/religious education, compared to 57 percent in 1985. The difference probably corresponds with the decline in vowed religious teaching theology, said Creighton’s Timothy Cook, the education professor who conducted the study.

“This shortage of religion teachers often results in school principals asking teachers of other subjects to teach religion,” Cook said in a telephone interview with Catholic News Service.

“Candidates are selected based upon evidence that they live their Catholic faith and will likely be good faith mentors,” he said. “However, without formal training in the content of Catholic religion and the methods of teaching religion, these teachers fall short of the ideal, and must try to pick up content and methods on the fly.”

Students who have entered into either of the two new programs offered at Creighton University – which began in the 2009 fall semester – will gain advanced knowledge in theology as well as practical knowledge in teaching Catholic religion, said Jesuit Father Richard Hauser, a theology professor at the university.

They also will be able to practice their teaching during the program through guided field placements in Omaha-area Catholic schools, Father Hauser said.

The education component of the program provides a full Nebraska state certification for graduates who remain in the state and covers methods of teaching religion for those planning to teach in other parts of the country, he said.

“I want to help individuals question their beliefs, look at the world from new perspectives, and ultimately recognize the God-given goodness that is already inside of them, as well as everyone else,” he told CNS. “I feel that this program would provide me with the educational groundwork toward this end.”

The fundamental purpose for Catholic elementary and secondary schools is to teach the Catholic faith to young people, Cook said.

“Committed and well-prepared religion teachers are key players in carrying out this Gospel mandate to apprentice disciples of Jesus,” he said. “It is time to address the growing need for new highly qualified religion teachers in our Catholic schools.”

An analysis indicates that university-based preparation in religion and in teaching methods has a significant positive impact on religion teacher retention, the study concluded.

“That is to say, teachers with formal preparation in their subject and in teaching methods are less likely to leave the profession,” the study said.

The five-year degree program was established a little too late for Creighton senior Miriam Thorn to enroll. But the 21-year-old from Milwaukee, whose major is theology and minor is philosophy, believes Catholic schools nationwide will benefit from future graduates of the program.

“I wish it was around when I was starting off,” she said. “To get your master’s in five years, to be able to have scholarship opportunities for grad work is just amazing.

“I think to be on a continuous pace of starting in freshman year and ending your fifth year with the same professors, the same environment, … (to) have that stability and come out with your master’s is just awesome and something a lot of people should take advantage of and look into,” she said.