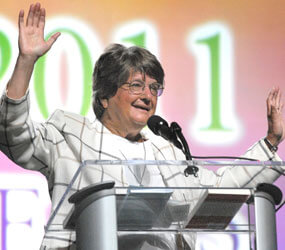 NEW ORLEANS – Sister Helen Prejean, a Sister of St. Joseph of Medaille and an international voice against the death penalty, urged educators at the National Catholic Educational Association convention April 27 to approach the issue in bold new ways with students who are increasingly opposed to capital punishment.

“We want to talk to every teacher here and talk about conversations and partnering to get into the curriculum because kids are getting it,” Sister Helen told thousands of attendees during a general session at the three-day annual convention attended by more than 7,000 Catholic educators.

The author of “Dead Man Walking,” a book which chronicled the sister’s role as a spiritual adviser to two Louisiana men who were executed, said a poll commissioned by the U.S. bishops in 2002 showed 48 percent of Catholic adults opposed the death penalty while 58 percent of Catholics under the age of 30 opposed it.

“That there’s a shift. And it’s because of you,” Sister Helen told the educators.

When the U.S. bishops established the Catholic Campaign to End the Use of the Death Penalty in 2005 they published a pamphlet explaining the church’s opposition. Sister Helen said she asked the bishops if her group, the Catholic Mobilizing Network, could provide resources and strategies for schools and parishes.

To that end, the group has offered a one-act play, the “Dead Man Walking School Theatre Project,” written by filmmaker-actor Tim Robbins, for free performances by schools and churches. The group has also developed parish workshops and school and religious education curricula for students to discuss the death penalty.

The one-act play was performed after her talk in the convention hall by a group of students including some from St. Joseph’s Academy in Baton Rouge, Sister Helen’s alma mater.

“This can be performed in parishes in a sanctuary,” Sister Helen said. “All you need is a cross. You have both arms of the cross – the victim’s family on one end and the perpetrator’s family on the other. There’s the Jesus mystery.”

The play is especially effective with students, Sister Helen said. At Mercy High School in San Francisco, the entire school got involved with the project. Chemistry students researched the chemical makeup of the poisons used in executions, and economics students discovered that in the last 30 years, California had built one university and 27 prisons. Students also discovered that 80 percent of all executions are performed in 10 Southern states.

Sister Helen praised Pope John Paul II for his decision to change the Catechism of the Catholic Church to indicate that with modern prisons and life sentences, the cases in which society would need to protect itself by executing someone for a crime “are very rare, if not practically nonexistent.”

She said her own meeting with the pope to thank him for making that change was one of the highlights of her life.

“He changed the catechism,” Sister Helen said. “Whether people are officially beatified or canonized, it is their deeds that show us the heart of Christ. I just wanted to thank him for what he did for the church.”

At a book signing in Denver, Sister Helen said she met two men, who were obviously friends because they were laughing with each other, waiting at the end of a long line to talk to her.

“What are you, used car salesmen or something?” she asked them.

“Sister, I don’t know how to tell you this,” one of the men said, “but my son killed his son.”

The two men were fathers from the Columbine High School shootings in 1999 who had “made their way to each other,” Sister Helen said.

“I’m simply a storyteller,” she added. “Here are our heroes.”