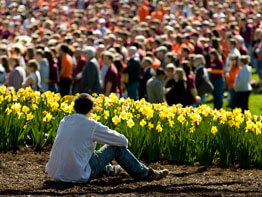 BLACKSBURG, Va. – By noon on April 16, 2007, Bryan Schamus, a member of the Newman Community at Virginia Tech, knew that at least 22 people had been killed on campus. He quickly gathered with other student leaders of the university’s Catholic campus ministry to figure out how to respond to the tragedy, which would later become known as the deadliest school shooting in U.S. history.

By the end of the day, 33 students and faculty, including the gunman, had died.

A Mass of healing at the Newman Center that evening “was jampacked with maybe close to 200 people,” Schamus recalled. People of all faiths had gathered for mutual support, consolation and comfort. What participants found were uplifting, youthful voices singing about hope and love overcoming fear.

For Schamus, and all those involved in the project, the past year has been a journey of transformation culminating in the creation of a CD of those songs to be released April 16 in memory of the lives lost at Virginia Tech. Called “Voices of Hope,” the CD is a message of hope, faith and transformation.

“Instead of being victims, we’re witnesses of the real power of God that helps us to stand up, to walk and to live,” said Schamus, now a senior and director of the CD. “If there’s any community in the world that needs to be at the cross right now, it’s us.”

“When I got here, I heard a lot of stories about what happened and the response of the Catholic community to that violence,” said Father Grace, whom the Richmond Diocese assigned to the campus shortly after the tragedy. “Over and over I heard from people their appreciation of the ability to gather together at Newman, and the meaningfulness and comfort people drew from the music at that gathering.”

Since the tragedy occurred in the midst of the Easter season, students chose appropriate songs that communicated love, hope and comfort.

“Given what they were facing, it was very, very powerful,” Father Grace said. “And as I listened to the songs, it struck me that this is an important piece of their journey, and I thought it would be significant for other people too.”

Two professional songwriters aided in the effort. One evening, Schamus sent an e-mail to songwriter David Kauffman, telling him they were singing his contemporary arrangement of Psalm 46, called “Be Still,” every night, and what an impact it was having. Kauffman, publisher of Good for the Soul Music, immediately sent 100 CDs to Schamus and asked if he could travel from his home in San Antonio to lead them in a night of prayer and song.

Then David Haas, a well-known writer of Catholic hymns, who wrote three of the songs selected for the CD, came to Virginia Tech to perform a one-night concert.

When Schamus asked if he could record their music, the songwriters supported him 100 percent.

“The response was unbelievable,” he said. “All three publishers (GIA publications, OCP and Good for the Soul Music) of the 10 songs we recorded gave us royalties free, and they did it quickly and willingly and were excited to be a part of it.”

In reliving the experience, Schamus himself had to come to terms with the tragedy.

“What I look at now is how we’ve all been given free will, we all make decisions,” Schamus said. “The ‘God moment’ comes afterward when people rush in to help and to save others. For instance, I thought about what causes a rescue squad to keep pushing against a chained door to get through when they know there’s someone with a gun on the other side?

“And for us as a music ministry and as a Catholic group, we had free will in how we wanted to respond to this tragedy,” said Schamus, who plans to pursue a graduate degree in pastoral ministries. “We decided the answer is not to pretend it never happened but to take it head on.”

Even freshmen like Marie Volger, who was not yet a student at Virginia Tech at the time of the shootings, have experienced the impact.

“There’s such a strong purpose in this CD, and the idea that no pit is so deep that God is not deeper still is very appropriate,” said Volger, who plays piano on the CD and is a parishioner of Sacred Heart of Jesus Parish in Winchester. “There’s been a deep sense of healing. The end result for me is an affirmation of the sense of community here.”