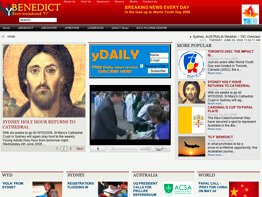 Sydney Cardinal George Pell launched the Web site, www.ybenedict.org, in late May at a Spanish-themed party in Sydney, where World Youth Day will be held July 15-20.

The Web site offers daily pilgrim news in English and Spanish for the final days leading up to World Youth Day events. It will be translated into Spanish by Mexican youths who are in Sydney volunteering for the events.

The Web site is a project of Towards 2008, the Australian student and young adult campaign for World Youth Day 2008.

Anthony McCarthy, national coordinator of Towards 2008, said the Web site will allow pilgrims “from Sydney to Santiago, from South Australia to Spain” to follow all the developments leading up to the events.

During the launch party, Cardinal Pell also starred in a short video commercial to promote Carnivale Christi 2008, an event at the University of Sydney as part of the World Youth Day Youth Festival.

The party followed the “Activ8” promotions May 24, when young people promoted World Youth Day in 50 locations across Sydney.