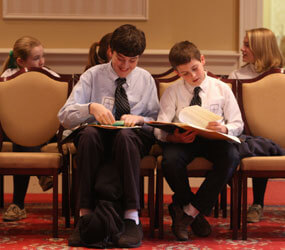 ANNAPOLIS – More than 200 students from Catholic and other nonpublic schools left shiny apples for their state lawmakers March 16 – not the edible kind, but symbolic paper cutouts meant to garner support for a long-sought business tax credit benefitting public and nonpublic schools.

“BOAST” (Building Opportunities for All Students and Teachers in Maryland) would provide a state tax credit to businesses that donate to scholarship organizations for students attending nonpublic schools.

Nonprofit organizations that provide enrichment programs for public school students would also benefit from the program, as would teachers in public and nonpublic schools who would receive professional development grants.

After meeting with Baltimore County Del. James Malone, 12-year-old Vincent Madison said it was important to convince lawmakers to pass the BOAST legislation “to help us get a better education.”

“I really think it would help prevent other schools from closing ,” said the 7th-grader from Our Lady of Victory School in Arbutus, “including our own.”

Because of the tight fiscal situation this year, BOAST supporters are not seeking any funding for the bill. They merely wish to establish it in law so that the governor can fund it in future legislative sessions.

“It can help a lot with a little,” Kendall said.

During a legislative reception March 16, Anne Arundel County Sen. James DeGrange, lead sponsor of the Senate BOAST bill, Senate Bill 315, said the time has come for lawmakers to approve it. Although the Senate has passed BOAST in two previous years, the measure has languished in the House of Delegates Ways and Means Committee, chaired by Montgomery County Del. Sheila E. Hixson.

“Your work is to make sure the delegates over there in the Ways and Means Committee move this bill and get it out so we can put this program together,” said Sen. DeGrange, noting that the BOAST legislation has been around for six years. “It’s time to do it. Let’s get it done.”

Southern Maryland Sen. Roy Dyson said the state is nearly $1.6 billion in debt and could not afford to absorb the costs that would be incurred if nonpublic schools closed. For every 75 students who move from a nonpublic school to a public school, according to the Maryland Catholic Conference, Maryland pays an additional $1 million.

Dr. Barbara Edmondson, Baltimore superintendent of Catholic schools, said that several states offer far more benefits to nonpublic schools than what Maryland affords. Since the establishment of the Pennsylvania Educational Improvement Tax Credit, more than 3,600 companies have pledged in excess of $360 million dollars to scholarship and educational improvement programs in the state.

“I hope we can join the ranks of those states that offer that to their families,” Edmonson said.