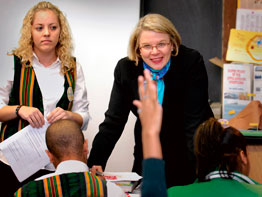 WASHINGTON – When President George W. Bush gave his State of the Union address Jan. 28, he briefly mentioned something Catholics know all too well: Their inner-city schools are closing.

Although the president did not specifically name Catholic schools, the reference to “faith-based schools” that are “disappearing at an alarming rate in many of America’s inner cities,” clearly described what has been happening to the nation’s inner-city Catholic schools.

According to the National Catholic Educational Association, enrollment in Catholic elementary schools has dropped 15 percent nationwide since 2001-02, and more than 212 U.S. Catholic schools were closed or consolidated during the 2006-07 school year.

In response to the steady decline of inner-city “faith-based schools,” the president said this spring he would “convene a White House summit aimed at strengthening these lifelines of learning.”

Sister Dale McDonald, a Sister of the Presentation of the Blessed Virgin Mary and the NCEA’s director of public policy and educational research, has attended some of the planning sessions for the summit, scheduled to take place in late April.

She said the gathering, which should include about 300 people including educators, business leaders and philanthropists, will aim to “shed light” on the problem of city schools closing.

“I’m hopeful it will call attention to the problem and bring together people that can do something about it,” she told Catholic News Service.

The day after the State of the Union address, U.S. Education Secretary Margaret Spellings said, “Catholic schools are treasures, especially in our cities, but their numbers are in decline.”

She told CNS in a phone interview that she has heard from mayors across the country who are concerned about the increasing number of Catholic schools closing in their cities.

“We need to help Americans understand the value of these schools and figure out collectively what can we do to be more supportive of them,” she said.

Although Spellings oversees the country’s public school system and is not a Catholic, she certainly keeps tabs on Catholic schools and, as she puts it, “visits one on a regular basis,” since her daughter attends a Catholic high school in Washington.

She also paid a special visit to St. Peter Claver Catholic Central School in New Orleans Jan. 31 and described it as “a great example of the type of work Catholic schools have done and continue to do here in Louisiana after the hurricanes.”

Prior to her visit there, she told CNS she was particularly impressed with the attitude of so many Catholic school officials immediately after Hurricane Katrina. In their determination to reopen, she said they took in students without charging tuition and “with no questions asked.”

St. Peter Claver, which opened in 1921, is located in the Treme neighborhood, one of the oldest African-American neighborhoods in New Orleans. It reopened less than five months after Katrina when the neighborhood around it was still devastated from flood damage.

Today it is one of six schools in a newly established Catholic Central School Consortium sharing resources with other schools that are serving the returning population in the most heavily damaged neighborhoods of the city.

New Orleans is not the only archdiocese to use the consortium model as a way to cut costs. Similar programs operate in Washington and Indianapolis and other dioceses are considering them.

Washington’s consortium of Catholic schools, now in its 11th year, will be reduced during the next school year to include only four schools. Of the remaining schools, seven will become charter schools and one will become a parish-run school.

Elsewhere in the country, Bishop Matthew H. Clark of Rochester, N.Y., announced in January that 13 of 24 Catholic schools in Monroe County, the seat of the 12-county diocese, will close at the end of the school year.

In the midst of these challenges, vouchers are often lifted up as a way to sustain Catholic schools and make them affordable.

In areas where families can use vouchers at Catholic schools, they do not end up always being the full solution. In 2006, the Washington Archdiocese subsidized nearly 800 of the vouchers for students in the consortium by more than $2,500 each to cover the gap between the $4,500 tuition and the real cost of education.

Washington’s scholarship program is also not a long-term fix especially since the program is a pilot and requires reauthorization by Congress in 2009.

A new Congress might not support voucher initiatives. Current presidential candidates are split along party lines in their support for school-choice options that include private schools. Republicans are for it; Democrats against.

But Bush gave vouchers two thumbs up during his State of the Union address, and even stressing that limited programs, such as the Washington scholarship program, be significantly expanded.

The president called for a $300 million scholarship program, called Pell Grants for Kids, to provide alternatives for “children trapped in failing public schools.” The proposal, which doesn’t use the word “vouchers,” links these potential scholarships to grants offered to college students.

Thomas Hunt, an education professor at the Marianist-run University of Dayton in Ohio and co-editor of “Catholic Schools in the United States: An Encyclopedia,” is a firm believer in school-choice initiatives, but he also told CNS that they were but “one piece of the puzzle – one way to save Catholic schools.”

He said people can bemoan the condition of Catholic schools or they can look for a cooperative approach and “go forward.”

And as he sees it, the discussion all depends on getting others on board. “We need to broaden our participation base,” he said, noting that there should be an “ecumenical forum on school choice.”

“This is something we can galvanize on a little bit,” he added.

Sounds like another school summit could be in the works.