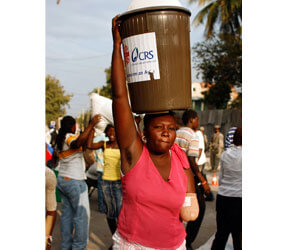 Six months ago the earth shook in Haiti for 35 seconds. Thirty five seconds that ended so many lives and changed many more. Let me share with you a story that is very typical of life in Haiti over the last six months.

Elucienne Lampi was at her street stall selling goods when the quake hit. She ran home to find that the house next door had collapsed onto hers, bringing down the roof. Luckily, everyone was okay. Since then, Elucienne, her three daughters and three grandchildren have been living at one of the hundreds of camps in Port-au-Prince that sprang up after the quake.

At first they only had clothing and sheets to cover themselves, but they later received tarps and other materials to construct the 8-foot by 15-foot tent they now live in. Elucienne has used sheets to divide it into four different sections. It is hot under the tarps and, unless it rains, everyone is outside by 8 a.m. In the early days, there was no bathroom so people were forced to go behind trees. Neither was there a supply of clean water.

Elucienne’s biggest worry is that she had no money or basics like food. She needs money for medical treatment for herself and her daughter, and to fix the roof of their home. But now she does have a little money and a little hope, thanks to a new job. In June, she started a cleaning job at the camp. “I sweep, carry water and wash. It is hard work but at least it is a stable income,” she says. She hopes to go back to her house when she has enough money to fix the roof.

Elucienne’s job is part of a Catholic Relief Services (CRS) cash-for-work program at the camp that employs the residents to perform important tasks, such as keeping washing stations clean. Vital work gets done, those in need like Elucienne earn an income and cash is put into the local economy.

Elucienne is one of approximately 6,000 people CRS has employed in cash-for-work activities such as the clearing of drainage canals, or digging new drainage channels. These are designed both to provide income to vulnerable people and benefit communities.

Since the quake hit, CRS has installed over 600 latrines and hand-washing stations, so important in preventing the spread of disease. We have also set up potable water tanks and inflatable water bladders in Port-au-Prince, including the ones at Elucienne’s camp. We now supply an estimated 375,000 gallons of clean water every month.

CRS has provided emergency shelter materials to more than 114,000 people, including the shelters at Elucienne’s camp. We have distributed 10.6 million rations of food to nearly 900,000 people, and are currently providing food to more than 90,000 students in over 270 schools, and monthly food rations to more than 100 orphanages and child-care centers in Port-au-Prince and beyond, benefiting nearly 10,000 children.

The huge outpouring of support from Catholics and others of good faith in the U.S. has enabled CRS to bring life-giving aid to hundreds of thousands of people over the last six months. But if we are to build back a better Haiti, much more needs to be done.

There are some 1.6 million people like Elucienne and her family living in camps, and another 400,000 are living with extended family or friends. Over 1,300 schools and 50 health care facilities were completely destroyed and more are significantly damaged. The level of destruction is extraordinary. The debris alone would fill 8,000 Olympic swimming pools. The Inter-American Development Bank estimates that the earthquake that hit Haiti has had the largest proportional impact that any country has ever experienced.

The challenges in rebuilding Haiti are enormous, but we are making a start. Elucienne’s tarp shelter offers limited privacy and protection from the elements. CRS is poised to roll out 8,000 transitional shelters – tough wooden pre-fabricated homes built on a strong foundation – as secure accommodation for families until they can return to real houses. For many (Port-au-Prince had terrible housing problems even before the quake), this will mean a decent roof over their head for the first time.

This transitional shelter, as well as eventual permanent building, is part of a five-year-plus strategy that includes work in the areas of shelter and infrastructure, health and HIV/AIDS, water and sanitation, food, improving livelihoods, and protection of women and children. With this strategy, we hope to improve the lives of 900,000 Haitians.

We at CRS are proud of our achievements so far in the most difficult working conditions imaginable. But what has been done has only been possible with your support. Thank you. Our work continues, as together with the Haitian people and local Catholic Church, we strive to build a brighter future.

Baltimore-based Catholic Relief Services is the official international humanitarian agency of the Catholic community in the United States. The agency provides assistance to people in more than 100 countries and territories based on need, regardless of race, nationality or creed. For more information, visit www.crs.org or www.crsespanol.org.