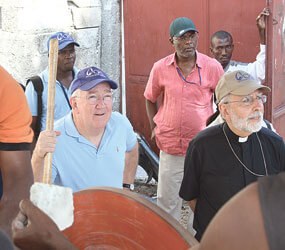 PORT-AU-PRINCE, Haiti – The engineer from the Philippines and the program director from the Netherlands putting his designs into play are on a first-name basis with a senior manager who did her undergraduate work at the University of Notre Dame and her graduate studies at an Ivy League school.

And how do the best and brightest forge a bond with the field worker who grew up in a shack that had a voodoo altar but no running water?

How are they all woven into the same fabric of Catholic Relief Services?

“We made an explicit and deliberate program,” Ken Hackett says, “to describe what it is about CRS that’s Catholic and what that means to us and every individual who works for CRS. It is not implicit or taken for granted. It is made explicit.

It leans heavily on the Sermon on the Mount.

It was that ethos that attracted Hackett to CRS nearly 40 years ago, what he has instilled in his employees during his 18 years as its president, and what will continue to drive CRS when he retires from that post at the end of this year.

“Ken has taken this important mission of the church in the U.S. to a new level,” said Tucson Bishop Gerald F. Kicanas, chairman of the board of CRS, which carries out the U.S. Conference of Catholic Bishops’ commitment to “assist the poor and vulnerable overseas.”

“He has been the face of CRS, which is a tremendous emissary of the church’s outreach,” Bishop Kicanas added. “We talk about the emerging lay leadership of the church. Clearly, Ken is an example of that.”

Bishop Kicanas and Dr. Carolyn Woo, who will take charge of Baltimore-based CRS Jan. 1, accompanied Hackett to this capital city of Haiti Oct. 23-27.

The Catholic Review was also there, on what was expected to be Hackett’s last overseas field trip as president of CRS.

Hackett, 64, directs nearly 7,000 employees in more than 90 countries. He has dealt with the high and mighty, both “seen the devil’s work” and commiserated with popes and Mother Teresa, but a practical appreciation of human nature preceded his unique perspective of the universal church.

Fresh out of Boston College in 1968, as Martin Luther King Jr. and Robert Kennedy lay dead and American ghettos burned, Hackett was accepted into the Peace Corps and sent to a remote village in Ghana.

He wrote to his parents about the woman who was more preoccupied with herself than her children, and the man who smiled as they played games, that the Ghanaian villagers were no different than the people in West Roxbury, the Boston neighborhood where he grew up.

“I came to the early conclusion,” Hackett explains, “that while income may divide us, the human condition is basically the same. People want things to get better for their family, and want their kids to do well. They don’t like it when someone screws them. Sometimes, they feel powerless.”

In West Roxbury, Holy Name Parish had the better CYO dances, but Hackett’s St. Theresa “had the better teams.” He had eight years of Jesuit training, at Boston College High School and then BC, where an early brush with Baltimore displayed his penchant for creating something out of nothing.

The BC football players included Baltimorean Henry Blaha, a graduate of what is now Loyola Blakefield, who was among those who showed Hackett and others how to cradle a lacrosse stick. Hackett was among those who went to the athletic director, and convinced him to donate old football equipment so that BC could start a club team.

Many CRS employees are exposed to considerable risk, be it from a cholera epidemic or political instability. After recalling the Greek-American CRS worker who was assassinated in Burundi, Africa Hackett is asked, how does he reconcile placing people in harm’s way?

“The challenge is getting people who live in situations that are chaotic and insecure to recognize that they are vulnerable,” he says. “I have been there; I know what they’re going through.”

Hired by CRS in 1972, Hackett returned to Africa, working in Sierra Leone and later Somalia and Kenya. During his time in the Philippines, he counted six attempted coups.

“My wife (Joan) was pregnant with our first when she landed there in 1987,” Hackett says. “There was no one working the airport, no one in the street. We drove back to our apartment and listened to two days of gunfire.”

Joan was a CRS employee, working in Mauritania and Ghana, before they married and she stayed home to raise their family. Their Rodgers Forge home segues from the nightly news to intercessions to God.

“Prayer is the No. 1 thing that has kept me sane in some of these instances,” Joan Hackett says. “That’s one of the things that has held us together.”

While Hackett laments that American news agencies have shuttered their foreign bureaus, he is a big fan of modern technology, be it a satellite phone or Skype.

“It wasn’t until 10, 15 years ago, that we put hard systems into place on security,” says Hackett. “We have very stringent procedures that we have tightened. The security of our people, that’s the thing that keeps senior leadership awake at night.”

Says Laura Dills, a CRS deputy country representative in Haiti: “Ken came up through the ranks. He knows what we’re dealing with.”

Dills was managing cyclone relief in India for CRS in January 2010, when a magnitude 7.0 earthquake outside Port-au-Prince killed an estimated 230,000 and compounded the conditions in Haiti, the most impoverished and illiterate nation in the Western Hemisphere.

Eight days later, she was re-assigned to Haiti. Dills’ experience ranged from Burkina Faso to Zimbabwe in Africa, but more importantly, she spoke French, one of the two official languages of Haiti.

“The Haitian people are capable,” Dills says. “We’re trying to coach and mentor them.”

Asked if he was glad that the Haiti crisis occurred at the end of his tenure, rather than the beginning, Hackett laughs and nods his head.

“We had just transferred Annemarie Reilly from chief of staff to vice president of overseas operations,” he says. “I did that because we didn’t have enough heft in big responses to major calamities. That allowed me, and others, to concentrate on things other than Haiti.”

Under Hackett, CRS’s growing ability to respond to an emergency has been seen in the 2004 tsunami that killed some 150,000 in Indonesia, helping millions of Pakistanis displaced by floods in 2010 or combating the ongoing famine in East Africa.

It has coordinated AIDS relief in Haiti and in eight African countries, and promoted nation-building in the south of Sudan.

CRS, which gets high marks from groups that rank the effectiveness of philanthropies, received $625 million from the federal government and other agencies, and another $294 million from private sources, mostly from Catholic dioceses and parishes, in fiscal year 2010, according to its annual report.

With the economic downturn, there is considerable pressure on the federal government to restrict foreign aid. In response, Hackett paraphrases New York Archbishop Timothy Dolan, who preceded Bishop Kicanas as chairman of the CRS board.

“I think,” Hackett says, “it was Archbishop Dolan who said, ‘We can’t just be congregationalists; we can’t just look at the people around us.’ We are universal as a church, we should be thinking of the pain people are going through, both here and around the world.”

The American church has raised hundreds of millions for Haitian relief. Hackett says that generosity is more important than ever.

“People are hurting everywhere,” Hackett says. “I don’t begrudge people in the United States who are suffering, saying ‘I can’t give.’ The funny thing is, they’re still supporting things. It’s marvelous. It’s wonderful.”

Note: This is the second in a series of reports by Catholic Review Managing Editor Paul McMullen on his travels with a CRS delegation in Haiti. His accommodations in Port-au-Prince were provided by Catholic Relief Services.