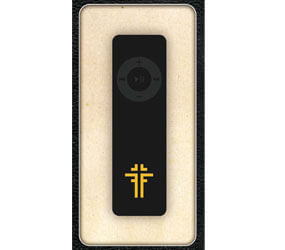 WASHINGTON – It has been a year in the making, but the first 1,000 MP3 players prepared by the host of a Catholic radio program are making their way to Catholic troops and wounded soldiers.

They’re not just any MP3 players, though. They’re “filled with Catholic content,” according to Cheri Lomonte, host of the Gabriel Award-winning radio program “Mary’s Touch” and the force behind a project she calls “Frontline Faith.”

The intent of the distribution program is to provide Catholic inspirational messages and recordings to tide Catholic soldiers over between the infrequent visits of a Catholic chaplain to battle zones in Iraq and Afghanistan.

Lomonte, in a July 20 telephone interview with Catholic News Service from Austin, Texas, said her radio program had a guest who helped bring wounded soldiers to Lourdes, France. Lomonte said she asked the guest, “What can we do to help?” The answer she got was: “Make sure they don’t get to this point. Do something before they get to this point.”

Previously, Lomonte had distributed MP3 players to some of Austin’s homeless. “We put appropriate things on the player, including snippets from the ‘Mary’s Touch’ radio program,” she said.

The Mass is a Memorial Day Mass celebrated by Archbishop Timothy P. Broglio of the U.S. Archdiocese for the Military Services at St. Matthew Cathedral in Washington. The rosary is a “Warrior Rosary” conceived by Lynda MacFarland, the wife of a career military man, using the sorrowful mysteries.

Other programming on the MP3 includes “Centurions of Rome,” a presentation made by the late Archbishop Fulton Sheen at the U.S. Military Academy at West Point, N.Y.; children’s letters to soldiers read by the children themselves; an examination of conscience; interview features from “Mary’s Touch”; and two-and-a-half hours of stories about faith in military life, including “The Grunt Padre” about a priest who ministered to infantry soldiers and a tale of a soldier who carried the Eucharist into battle.

The military archdiocese is distributing the MP3 players through its chaplains. But that can take some time, with a shortage of Catholic chaplains in the military.

“Our troops do not get to see a priest for sometimes seven to eight months,” Lomonte said. “That would be like you and me not being able to receive the Eucharist until Valentine’s Day, or sometime in the spring. … How can our troops go without the Eucharist for that long when they need it the most?”

It costs about $24 to buy the MP3 player, load it and prepare it for shipment. The funds raised have allowed for 1,000 players to be readied for distribution.

“We have 330,000 Catholics in our military, and our long-term goal is to have an MP3 player called ‘Frontline Faith’ to every member in our military who wants it,” Lomonte said.

The MP3 players aren’t just for combat zones. “One of the first places we send this to is our hospitals,” Lomonte said. “They have nothing. Our chaplains hand them out.”

Lomonte noted that the suicide rate among active-duty soldiers is at an all-time high. “They’re deprived of their spirituality,” she declared. “At a time when they need some kind of spirituality, this will help them. … That’s why we’re doing this.”

More information about the MP3 player project for the troops is available at www.frontlinefaithproject.com.