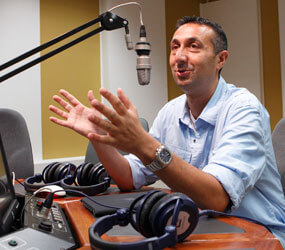 That’s just a small sampling from the itinerary of a new and rather novel Italian pilgrimage led by U.S. radio talk show host, “The Catholic Guy,” Lino Rulli.

Rulli and 40 listeners of his nationally broadcast radio show traveled with Father Rob Keighron of St. Helen Church, Howard Beach, N.Y., to have what Rulli called “the best and the worst pilgrimage in the world.”

It was the best, he said, because from July 10-18 they visited and prayed at holy sites in Rome, Florence, Assisi and Siena. It was the worst because not many people would equate the not-so-spiritual moments of singing Bon Jovi at a karaoke club and imbibing Italian wines and liqueurs as being part of a proper pilgrimage, explained Rulli.

“I think people like the idea that to be a Catholic, to have a religious experience does not mean to have a sour puss on your face before, during and after” those intensely spiritual moments, he said.

Rulli, who hosts “The Catholic Guy” daily on Sirius Satellite Radio’s The Catholic Channel, announced right before Christmas last year that listeners were invited to sign up for a nine-day pilgrimage to Italy.

He said he wasn’t sure how long they would have to promote the trip to get all 40 spots filled, but the trip was sold out on the day it was announced, and more than 100 people were on the waiting list.

“In radio you don’t get to interact very much with your listeners,” he told Catholic News Service July 20, while he and three crew members were in Rome to broadcast “The Catholic Guy” from the studios of Vatican Radio.

“So the idea of spending eight days with people you don’t know was definitely – we weren’t sure it would work, but it was by far the greatest thing I had ever done in my career,” he said.

At the beginning of the trip, he joked with his guests that they were starting out as strangers, but might end the journey as enemies. They put in 15-hour days and toured cities in 100-degree heat, making it seem “like a Catholic ‘Survivor,’ ” he said. But the participants still became friends.

The pilgrims – college students to grandparents – came from all over the United States, he said. The only thing they had in common, Rulli added, was listening to his show.

While almost everyone was Catholic, some did not go to church regularly, and a few belonged to other Christian denominations.

What struck people on the tour, Rulli said, was that many of them were able to experience for the first time both their faith and having fun with friends. Usually faith and fun are lived as separate entities, experienced on separate days and with different sets of people, he said.

On the trip, he said, they saw “the priest isn’t just the guy you see at church” behind the altar, but also is a normal man who loves football, will drink green Sambuca liqueur at the end of the day and can still be a strong spiritual leader.

One pilgrim said he was going to start going to church more regularly because he now saw “the priesthood in a different light,” said Rulli.

Out of the dozens of holy sites they visited, Rulli said the place that stirred the most emotion in the group was the Sanctuary of the Scala Santa (Holy Stairs) in Rome.

According to tradition, the Holy Stairs are the ones Jesus climbed when Pontius Pilate brought him before the crowd and handed him over to be crucified. The 28 marble steps have been covered with thick wood panels, now worn smooth from centuries of human traffic. Many climb the shrine’s stairs on their knees, pausing to pray on each step.

Rulli said his group members decided to climb the stairs on their knees because they felt it was “important to balance out all the fun we were having” and to remind themselves of the spiritual purpose of the trip.

At the top of the Holy Stairs, after climbing on their hands and knees, Rulli, a comedian and known “germaphobe,” unintentionally elicited laughter from his group when he immediately took out his pocket-sized bottle of hand sanitizer.