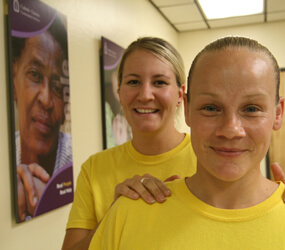 PHOENIX – When Aimee was 13 years old, her mother kicked her out of the house.

Not knowing what to do, she started sleeping with older men “just so that I’d have a roof over my head,” she said. After a few years, she had three children and an addiction to methamphetamine.

“I asked my mom to take my kids. I told her I’d be back in a month,” said Aimee, who asked that her last name be withheld to protect her family. “I never came back. Not for eight years.”

What followed were years of prostitution in Las Vegas and Hollywood, stints in jail and in and out of addiction, violence and abuse from a series of pimps. Eventually she had a “trick” buy her a bus ticket to Arizona, and in August 2008 she found herself at her grandparents’ house in Phoenix.

“They knew the life I was living and they didn’t approve of it,” Aimee said of her Catholic grandparents. “They’re very religious. I’d let them down so many times.”

But when she walked into her grandparents’ house, she said, her life changed.

“I was in my grandparents’ house in flip-flops and dirty feet and a miniskirt and my little duffle bag,” she said. “But they didn’t judge me.”

Her grandmother told her, “If you want to change your life, you’re the only one that can do it.”

While she was at a 12-step class, she found out about DIGNITY, Catholic Charities’ prostitution diversion and rehabilitation program. She entered the program on Sept. 15, 2008.

DIGNITY, or Developing Individual Growth and New Independence Through Yourself, is a Catholic Charities program that helps women make the difficult decision to leave “the life” of prostitution.

“I thought, ‘This is all I know. This is all I’m going to be good at,’“ Aimee said. “Somebody always told me what I wanted to hear and I always did what I needed to do to please them. Pimps feed off of that.”

DIGNITY staff members, most of whom are former prostitutes, know how hard it is to leave the life. A lot of time is spent in outreach.

Two staff members go out several times a week to spread word to women on the streets.

“Since most of our staff are survivors, they can identify who those women are,” said Rachel, the residential program supervisor, who also asked that her last name be withheld.

Women often come from situations where they weren’t allowed to make choices. They were told they weren’t good enough and that they couldn’t make it on their own. The average woman who enters prostitution, like Aimee, is 13 years old.

Staff members also visit Estrella Jail twice a week looking for women interested in leaving the life of prostitution. The program, which can support 15 women at a time, also receives referrals from halfway houses, mental illness institutions and the Phoenix Police Department.

The residential program, which Aimee went through, is a structured, one-year commitment. During the first 30 days, the women are not allowed to leave the house.

“The only time they leave is when they’re with a person on staff,” Rachel said. “There are no intimate or other relationships with men – period.”

During the first month, women do not receive phone calls. Throughout the year, the women adhere to a 5 p.m. curfew and everyone who is able must get a job.

Every night, the women take part in a group event, sometimes with a psychologist, that helps them work on the issues of trauma and abuse that come with prostitution.

During the last three months, women make plans for the future. This helps the women, who have been operating in “survival mode,” look beyond the next few days.

“Few people know or understand why women become trapped in the life of prostitution, or what prevents them from leaving,” said Paul Martodam, CEO of Catholic Charities Community Services. He said the program helps “women discover their God-given dignity” and “begin anew.”

Aimee’s been clean and sober for 13 months, has a full-time job and her own apartment. But perhaps most importantly to her, she has her children with her again.

She keeps in touch with the staff members at DIGNITY, often attending group therapy sessions with women leaving the life and sharing what’s she’s learned.

“I always tell the girls that they’re worth it,” she said. “You’re worth more than what anyone can pay for you. You don’t deserve to live that type of life.”