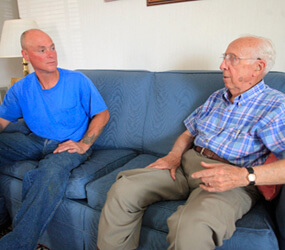 WILMINGTON, Del. – When Keith Swayne was about to be released from the Delaware Correctional Center near Smyrna three years ago, he faced a bleak future.

He had no close family members nearby and had burned any friendship bridges he had in Delaware two decades before, when he was convicted of assault with a deadly weapon.

Then he met Paul Collins of the Society of St. Vincent de Paul’s Prison Ministry Emergency Re-entry Program, which helps newly released inmates adjust to mainstream society when they have no family or friends to turn to for help.

“I don’t know what I would have done without Mr. Paul,” Swayne said. “I’d probably be back in there.”

Instead, Swayne, 47, earns a good salary from an electrical contracting company and has paid $10,000 in court-ordered restitution.

So far he has bucked the odds. While Delaware’s Department of Correction has no hard figures on the number of released prisoners who return to jail, the department uses the national rate of about 75 percent, said spokesman John Painter.

Gov. Jack Markell earlier this year announced a plan to reduce recidivism by 50 percent over the next five years. The plan aims to help ex-inmates overcome addictions, develop job and life skills, and improve their education; it also will provide Medicaid and other social services as needed.

During his 14 years as a volunteer in prisons, Collins says he has seen too many prisoners let out the front gate at Smyrna with $50, a pair of shoes, a pair of pants and a shirt but with nowhere to go and no way to get there.

“Everything’s as if (state officials) were intentionally trying to recycle them,” he told The Dialog, newspaper of the Diocese of Wilmington.

He sees a lack of cooperation among state departments and agencies over forms of identification available to prisoners upon their release. Most come out with only a prison ID, which the Department of Motor Vehicles and other state agencies do not recognize. That means a former prisoner must track down documentation required to acquire a state ID card or driver’s license, to receive Medicaid, food stamps and various social services, and to try to find a job, set up a bank account and rent a place to stay.

“These fellows have two and a half strikes against them when they get out,” Collins said.

Last year the program helped about 120 people at a total cost of $87,375; in comparison, the state spends $33,000 a year to keep one person in prison. This year Collins anticipates that St. Vincent de Paul will help at least 150 newly released prisoners.

The international Society of St. Vincent de Paul helps the poor and needy through parish chapters called conferences and relies on donations to fund its services. The Diocese of Wilmington has 33 conferences, including those at the Smyrna prison and the Delores J. Baylor Women’s Correctional Institution in New Castle.

Collins and Jim Woods, who works with women released from Baylor, developed the emergency re-entry program, which began about seven years ago, and do most of the program’s work.

Collins and Woods interview prisoners a month before their release to determine who can best use the program’s limited resources. They help them find housing, give them food, clothes from Catholic Charities Thrift Store in Wilmington, and a bus pass to get to probation meetings and job interviews.

Men are housed in motels but women often have different needs since many have children, said Woods. As a result, assistance to women usually costs more and continues longer, for an average of about six weeks.

Another organization that helps prepare former prisoners to successfully re-enter society is Sojourners’ Place in Wilmington, which provides long-term shelter to homeless men and women as they become self-supporting.

At Sojourners, “about 70 percent of the people who came to us from prison leave successfully,” said Sister Jeanne. “That means they have a job and a place to live, and they’ve addressed whatever their past issues are,” such as addictions and past debts.

Drug and alcohol rehabilitation, money management help and other programs aimed at teaching job skills are rare in Delaware prisons, Sister Jeanne said, although the Baylor prison has a “very tough, very strict” program for addicts.

“They leave there understanding their addiction and having some tools to deal with it,” she said.

Other states’ prison systems contract with various industries so inmates can learn job skills, she said.

She believes Markell’s plan will help. “If people can get hooked up with the right services, things can be very different. These are not hopeless criminals.”