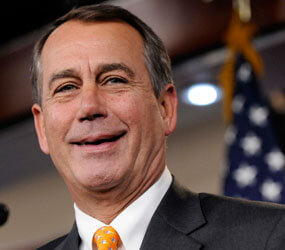 WASHINGTON – With more than three dozen Catholic Democrats voted out of office or choosing not to run in the November election, a decline in the number of Catholics in the 112th Congress would seem inevitable.

But the decrease is not nearly as steep as might be expected, because of the 33 new Catholic Republicans preparing to take office when the 112th Congress convenes Jan. 3.

With one House race still contested as of Dec. 3 – between Rep. Timothy Bishop, a New York Democrat who is Catholic, and Randy Altschuler, a Republican who is Jewish – the number of Catholics in the 112th Congress will be 149 or 150, compared to the 162 senators and representatives who identified themselves as Catholics as the 111th Congress began two years ago.

The latest number is more in line with the 155 Catholics at the start of the 110th Congress or the 109th’s 153 Catholics.

The change since the last Congress means that Catholics will now make up about 28 percent of the members of Congress, compared to 30 percent when the 111th Congress began. But both figures are higher than the percentage of Catholics in the U.S. population – 24 percent.

In contrast, the Catholic membership in the Senate has remained relatively stable. Among Republicans, four Catholics left and four new Catholic senators were elected, keeping the total at nine. The number of Catholic Democrats in the Senate went from 17 at the start of the 111th Congress to 15 now, but two of the 17 were now-Vice President Joe Biden, who resigned from the Senate shortly after the session began, and Sen. Ted Kennedy of Massachusetts, who died in August 2009.

The Congress that convenes in 2011 will be, incidentally, the first in 64 years that does not include a member of the Kennedy family. John F. Kennedy, who was elected the first Catholic president in 1960, first served in the House in 1947; Ted’s son, Patrick Kennedy, who represented Rhode Island in the House since 1995, decided not to run for re-election in 2010.

Compiling numbers on the Catholics in Congress is not always easy, however.

Although several sources – including his own campaign website – list Republican Sen.-elect Marco Rubio of Florida as a Catholic, he and his family worship most frequently at Christ Fellowship in Palmetto Bay, Fla., a nondenominational Christian church.

Democratic Sen.-elect Chris Coons, on the other hand, is a Presbyterian who regularly attends St. Ann Catholic Church in Wilmington, Del. He and his wife, Annie, who is Catholic, are raising their three children in the Catholic faith.

For the purposes of this article, Catholic News Service counts Rubio but not Coons as Catholic.
At least one new Catholic member of Congress makes no bones about his faith.

Rep.-elect Bobby Schilling, a Republican from Illinois, runs St. Giuseppe’s Heavenly Pizza in East Moline, a restaurant that closes on Sundays so that the Schillings and their employees can spend time with their families.

“People warned them that this would doom their business to failure,” it says on Schilling’s campaign website. “With faith and persistence, the business has not only sustained itself, but has grown.”

Schilling also has strong union ties, having served as a shop steward for the International Paper Workers Union for four years and as treasurer for the United Food and Commercial Workers Union while working at Prudential Financial insurance company from 1987 to 1995.

He and his wife, Christie, have 10 children and one grandchild. The family attends St. Malachy’s Parish in Geneseo, Ill.

Although the House leadership will change from one party to another in January, a Catholic will remain as Speaker of the House. When Democratic Rep. Nancy Pelosi of California steps down, Republican Rep. John Boehner of Ohio will take the post. (He will not formally claim the post until Jan. 5, when he is expected to receive a majority of votes from the full House.)

Pelosi was elected Nov. 17 to be minority leader.

No Catholics will be serving in either party’s other top leadership spots in the next Congress. Reps. Eric Cantor of Virginia, who is Jewish, and Kevin McCarthy of California, a Baptist, will be majority leader and majority whip, respectively, in the new Republican-led Congress.

Reps. Steny Hoyer of Maryland, a Baptist, and James Clyburn of South Carolina, a member of the African Methodist Episcopal Church, held the majority posts in the 111th Congress but will serve beginning next year as minority whip and assistant leader, respectively.