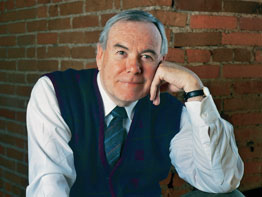 ST. LOUIS PARK, Minn. – A funeral Mass was scheduled for March 27 at the Basilica of St. Mary in Minneapolis for Jon Hassler, an award-winning novelist and a professor emeritus of fiction at St. John’s University in Collegeville.

Mr. Hassler died at Methodist Hospital in the Minneapolis suburb of St. Louis Park March 20, 10 days shy of his 75th birthday. He had suffered for more than a decade from progressive supranuclear palsy, a rare neurological disorder that causes serious and permanent problems with control of gait and balance.

Mr. Hassler had graduated from St. John’s in 1955 with a bachelor’s degree in English. He was writer in residence at the university from 1980 until his retirement in 1997.

In a statement, Benedictine Brother Dietrich Reinhart, president of St. John’s, said Mr. Hassler was one of the nation’s “great storytellers,” and his themes were “about our struggles with choices between good and evil in their everyday manifestations.”

“Jon showed us that we do have choices, and that they are important, no matter how restricted our realm,” he said. “With his loving heart, discerning eye and keen sense of humor, Jon made us laugh while we absorb these serious lessons.”

In the 28 weeks he did hold out, he wrote 14 short stories, and the 14th one became his first published work, “Staggerford,” which won the novel of the year award in 1978 from the Friends of American Writers.

Another Mr. Hassler novel, 1987’s “Grand Opening,” was chosen as best fiction of the year by the Society of Midland Authors. Mr. Hassler received the Colman Barry Award for Distinguished Contributions to Religion and Society from St. John’s University in 2003, the Flanagan Prize in 2000 from the Minnesota Humanities Commission, and the 2000 Distinguished Minnesotan Award from Bemidji State University, where he taught briefly before joining the St. John’s faculty.

In addition to adult fiction, Mr. Hassler wrote novels for young adults, including “Jemmy” and “Four Miles to Pinecone.”

Another Mr. Hassler novel, “A Green Journey,” was made into “The Love She Sought,” a made-for-TV movie for NBC starring Angela Lansbury and Denholm Elliott. Actor Robert Redford bought the film rights to the Mr. Hassler novel “The Love Hunter” in 1983, although it has never been produced.

Mr. Hassler was slated to receive the Campion Award from America, the Jesuit-published magazine in New York. It is usually given to a Christian person of letters, usually at the end of a distinguished career.

Past winners have included John Updike, Annie Dillard and Father Andrew Greeley. Because of Mr. Hassler’s health, plans were being made for magazine staff members to travel to Collegeville to present the award to him there.

In a message to readers, America magazine said Mr. Hassler’s books “examined with infinite compassion the lives of the residents of small-town Minnesota, and typically touched on overtly Catholic themes: Clergy and religious made frequent appearances in his stories, and parish life was quite often at the center of his characters’ lives.”

Mr. Hassler had a master’s degree from the University of North Dakota. Before joining the faculty at St. John’s, he also taught at what is now Central Lakes College. Prior to teaching on the college level, he taught high school English for several years.

Mr. Hassler, who lived most recently in Minneapolis, is survived by his third wife, Gretchen Kresl, who had helped the author with his 22nd book, a novel tentatively titled “Jay O’Malley,” which was virtually complete at the time of his death. He also is survived by three children from his first marriage.