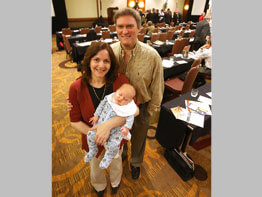 The 45-year-old anesthesiologist from Oldsmar, Fla., sat in the rear of a ballroom at the Baltimore Hyatt Regency, a shirt-sleeved arm around his wife, Nelly. The couple became grandparents on Sept. 19, but here, they formed a cocoon around their youngest child.

Joshua Peter Thomeny was born Aug. 17. He has nine brothers and sisters, but as Ms. Thomeny said, she also carried her “four little souls in heaven.”

The Thomenys have made several January trips to Washington, D.C. for the March For Life. He is attending at least his third conference conducted by the CMA, whose mission statement is “Upholding the principles of the Catholic faith in the science and practice of medicine.”

“It’s great to gather with other Catholic physicians and renew our commitment to Christ,” Dr. Thomeny said. “You learn, and gain inspiration from some wonderful speakers.”

Attendees gave a standing ovation to the Oct. 9 keynote address by George Weigel, who by his own account gave a “sketchy” overview of the conference’s theme, the “Theology of the Body,” the teachings of Pope John Paul II.

Dr. John F. Brehany, the executive director of the CMA, which draws members from the U.S. and Canada, said that approximately 320 registered for the conference.

Dr. George Isajiw, of Upper Darby, Pa., CMA president from 1992-93, said that its rolls plummeted after Pope Paul VI put forth Humanae Vitae in 1968. Now, however, membership is booming thanks to younger health care professionals like Dr. Thomeny.

“When the (CMA) board voted to support Humanae Vitae, we lost more than 50 percent of our members,” Dr. Isajiw said. “The organization dropped down to just several hundred, but we’ve seen great growth in the last 10-15 years.

“We’re getting an influx of younger members, men and women who are just starting their practice. Many are joining because of issues related to contraception, natural family planning.”

The Thomenys could be a poster family for the CMA.

A native of Louisiana, Patrick was visiting a friend in Chile when he met Nelly. Married in 1985, their 10 children range from newborn Joshua to Natalie, 21, who made them grandparents last month.

Joseph Francis, their 5-year-old, was baptized in Augusta, Ga., – by a newly-ordained friend.

“We were blessed 12 years ago, Ms. Thomeny said, of a trip she and her husband took to Rome – along with Claire, now 12, then in utero. “I was pregnant with Claire when he (the pope) was passing by. The Holy Spirit guided us to the right place, to touch his hand.”

“Needless to say,” Dr. Thomeny said, “I like the theme of this year’s conference, the Theology of the Body.”

Mr. Weigel, the Distinguished Senior Fellow of the Ethics and Public Policy Center in Washington, D.C., is also the late Pope John Paul II’s biographer. Alluding to attacks on the sanctity of marriage and promotion of promiscuity, he made a call to promote the pope’s teachings.

“Many of us have the courage of our convictions,” Mr. Weigel said during a question and answer session. “Now, we have a way to explain it to people who say, if it itches, scratch it.”

Mr. Weigel is a Baltimore native, like CMA president-elect Dr. Louis C. Breschi, a semi-retired urologist who is a long-time parishioner at Immaculate Conception in Towson.

In addition to Theology of the Body, Dr. Breschi made issues of conscience a priority of the conference. On the morning of Oct. 9, Dr. Brehany was among the panelists addressing “Conscience and Modern Medicine: What are the Challenges in Serving Patients?”

A nearby lobby included informational booths, including ones manned by the Maryland Catholic Conference and the Archdiocese of Baltimore’s Respect Life office.

The CMA conference was to conclude Oct. 11, with Archbishop Edwin F. O’Brien celebrating a 5:30 p.m. White Mass for health care professionals at the Basilica of the National Shrine of the Assumption of the Blessed Virgin Mary.