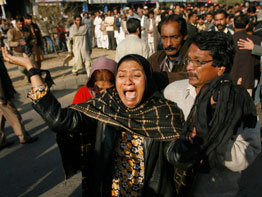 “We condemn this dastardly act. It is a terrible tragedy for Pakistan,” said Bishop Anthony Lobo of Islamabad-Rawalpindi, secretary-general of the Catholic Bishops Conference of Pakistan, in a Dec. 27 telephone interview with Catholic News Service from Rawalpindi, where Bhutto was assassinated.

Ms. Bhutto, 54, and several others were killed Dec. 27 in a suicide attack.

Hundreds of thousands of Bhutto’s supporters wept, chanted and paid their last respects at her burial Dec. 28 in the town of Garhi Khuda Bakhsh. Demonstrators protesting her death in cities and towns throughout the country clashed with police and burned buildings and train stations.

A telegram of condolence from Cardinal Tarcisio Bertone, Vatican secretary of state, described the killing as a “brutal terrorist attack” and said, “The Holy Father expresses sentiments of deep sympathy and spiritual closeness to the members of her family and to the entire Pakistani nation.”

“He prays that further violence will be avoided and that every effort will be made to build a climate of respect and trust, which are so necessary if good order is to be maintained in society and if the country’s political institutions are to operate effectively,” the cardinal said in the message sent Dec. 28 to Archbishop Lawrence Saldanha of Lahore, president of the Pakistani bishops’ conference.

In the CNS interview, Bishop Lobo said, “Obviously, this is a setback for democracy.”

“The forces that were opposed to it have succeeded this time,” he said.

Describing Ms. Bhutto as “an extraordinary, brave woman,” Bishop Lobo said that “she was aware of the great danger to her life. Yet, she went around to assert democracy and laid down her life in the process.”

Peter Jacob, executive secretary of the National Commission for Justice and Peace of the Pakistani bishops’ conference, told CNS, “The people are stunned and angry.”

Mr. Jacob, who was on his way to Lahore from Multan, said he could see angry people gathering along the streets and setting up road blocks as the news of the assassination spread.

He expressed hope that the government would postpone the elections. The church’s commission already has called off all its election advocacy and monitoring work, he noted.

Meanwhile, Jesuit Father Federico Lombardi, the Vatican spokesman, said the “tragic news” of Ms. Bhutto’s murder “is a cause of sadness in itself and because it is another sign of continuing violence, which makes it difficult to see how the Pakistani people, already suffering, will be able to find peace.”

He told CNS Dec. 27 that Pope Benedict is informed immediately when such tragedies occur in the world.

Islamic militant groups had threatened to target Ms. Bhutto for declaring that if her party was voted into power she would not hesitate to allow U.S. forces to enter Pakistan to chase Taliban and al-Qaida cadres if Pakistani forces failed to do so.

Ms. Bhutto served as Pakistan’s prime minister twice between 1988 and 1996. In mid-October, she returned to Pakistan after an eight-year exile. A suicide attacker killed more than 140 people during her homecoming celebration.

Gen. Pervez Musharraf, Pakistan’s president, had declared a national emergency in early November. The emergency was lifted under domestic and international pressure in mid-December. President Musharraf said he blamed Islamic extremists for her death and said he would work to fight them, reported The Associated Press.