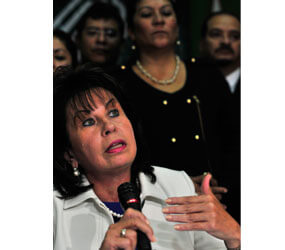 The Guatemalan bishops’ conference and the archbishop of Guatemala City were quick to criticize the divorce, which analysts say has strained the relationship between the president’s administration and the church.

On April 13, a court approved the divorce of President Alvaro Colom and Torres, clearing the way for her candidacy in this year’s elections. As the president’s wife, she was barred from running under a constitutional rule that prohibits the candidacy of family members of seated presidents.

Torres told reporters the divorce was a “personal sacrifice.”

“I’m divorcing the president, but I’m marrying the people of Guatemala,” she said.

However, in a conservative, majority Catholic country, the divorce has drawn sharp criticism. An April 7 letter from the bishops’ conference said “the institution of marriage is not a negotiable matter.”

The letter did not name the first couple, but it said the responsibility of marriage “is greater when the marriage or its dissolution is among notable people in society.” Representatives from the conference declined further comment to Catholic News Service.

Torres and Colom married eight years ago in a civil ceremony. It was her second marriage. Colom, who was elected in 2007 as the first left-of-center president in more than 50 years, put her in charge of one of his administration’s largest – and most controversial – anti-poverty programs, Mi Familia Progresa.

The program gives cash transfers of approximately $40 to families who send their children to school and health clinics. Political opponents charged that Torres was using the program to curry political support in rural, poor communities.

But Catholic leaders largely defended the program and its benefits in a country where the majority lives in poverty, according to the World Bank.

Last year, Guatemalan Cardinal Rodolfo Quezada Toruno said, “It’s unfortunate that there are some who are opposed to giving ($40) a month to the country’s poorest families so they can eat three times a day.” He also called for more transparency in the program.

The uproar over the divorce has put distance between Torres and the church, said Sandino Asturias, a political analyst and director of the Center for Guatemalan Studies.

“I think the church has been pretty clear on where they come down on this issue,” he said. “And in a society like Guatemala, a conservative society, the church’s words can carry a lot of weight.”

In the country’s second-largest city, Quetzaltenango, Jesuit Father Jose Maria Ferrero wrote in his weekly newspaper column, “If we have even the slightest Christian conscience, Catholics and evangelicals cannot vote for someone who used immoral acts to gain power.”

Asturias said the divorce has become the biggest issue in the early campaign season and that it threatens to detract from the real issues that the country faces.

“We should be less concerned with the divorce and more focused on what ideas she has,” Asturias said.

Guatemala, which in 1996 signed peace accords ending a 36-year civil war, has been increasingly overrun by violence and plagued by a failing education system and widespread poverty.