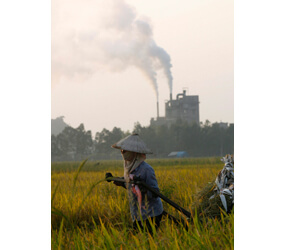 UNITED NATIONS – Climate change is more than an environmental concern; it is an issue of justice that merits immediate attention by world leaders. This was the message delivered repeatedly by Catholic participants in the Sept. 22 U.N. Summit on Climate Change in New York.

“It is unfair that people in developing countries pay the consequences for problems that rich countries have created,” said Elyzabeth Peredo, director of the Solon Foundation in Bolivia, at a Sept. 22 press conference. As an example, she said Bolivia generates only 0.1 percent of global greenhouse gas emissions, but melting glaciers caused by the warming effect of emissions worldwide endanger crops for small-scale farmers in communities throughout the country’s Andes mountains.

The proposals now under discussion at the United Nations set goals and targets for international investment in adaptation technologies to help countries withstand climate change.

“We have 2020 targets and even 2050 targets, but it’s necessary to act now to reduce the vulnerability of the poorest,” said Rene Grotenhuis, president of CIDSE, a Belgium-based international alliance of Catholic development agencies.

“We’re trying to put a human face on climate change,” he added. “Beyond the statistics, there are people living with the effects of climate change already. It’s necessary and urgent to get a bold and ambitious treaty in Copenhagen.”

The Sept. 22 summit, called by U.N. Secretary-General Ban Ki-moon, is a prelude to a comprehensive international climate change deal that will be finalized at the Conference of the Parties to the U.N. Framework Convention on Climate Change Dec. 7-18 in Copenhagen, Denmark. The nonbinding convention, or treaty, was adopted in 1992 and aims to prevent “dangerous” human interference with the climate system.

Representatives of the 192 countries that are parties to the climate change convention meet annually to review progress on implementing it. This year’s meeting in Denmark is viewed as a pivotal opportunity to reverse the causes of climate change by implementing a new treaty that will expand the reach of the convention’s 1997 Kyoto Protocol, which expires in 2012. That agreement set binding targets for developed countries to reduce greenhouse gas emissions.

The 15-member Catholic delegation of laity and religious was organized by CIDSE and Caritas Internationalis, a network of 164 Catholic charities. It is led by Cardinal Keith O’Brien of St. Andrews and Edinburgh, Scotland. The group met with heads of state, government and religious leaders and delegates in multiple venues Sept. 20-23.

Cardinal O’Brien called on heads of state to give the issue the highest political priority and to attend the meeting in Copenhagen to make sure a strong and equitable agreement is reached.

“Leaders should be getting down to serious negotiations for the sake of all humanity,” he said. “Instead, we are seeing political disagreements and a lack of commitment. The lives of millions of people in the developing world, who have done least to cause the problem, are at stake.”

Grotenhuis said a fair, just climate treaty is endangered by “too many countries holding their cards close to the vest, waiting to see what the main actors will do. There is not yet a broad commitment from players other than” the European Union.

Catholic delegates also participated in a Sept. 21 panel that addressed practical steps being taken to reduce vulnerability and enhance resilience of affected populations. The speakers also gave examples from their regions to illustrate the scope of the situation.

Janet Mangera, executive secretary of Caritas Kenya, said changing climate patterns made rainfall unreliable in Kenya, where only 17 percent of the land is moderately productive. “Of 38 million people, 10 million are in need of food,” she said. “In the past, we have had drought and famine, but it has not affected this high a percentage of the people.”

She said Caritas Kenya is helping communities adapt to the water shortage by promoting traditional and drought-resistant crops, such as sorghum, millet and cassava, and demonstrating bio-farming in the dioceses.

Nafisa D’Souza, executive director of Laya Resource Centre in the Indian state of Andhra Pradesh, said, “Local communities are very much affected by the climate crisis, but they are also very resilient.” But resilience erodes, she said, when scarce energy resources “go to meet the demands that come from the elites, either in or out of the country.”

Bishop Alvaro Ramazzini of San Marcos, Guatemala, said the Catholic delegation was committed to encouraging fundamental policy changes by its presence at the meeting and by promoting the relationships among development, climate change, social justice and the suffering of poor people.

He urged people to adopt an austerity toward natural resources. He said his morning shower at a New York hotel dumped a surprising amount of water on him. “It was not only incredible, but unfair,” he said, reflecting on the irregular availability of potable water in his country.

“We need to encourage a social system where to be is more important than to have,” Bishop Ramazzini added.