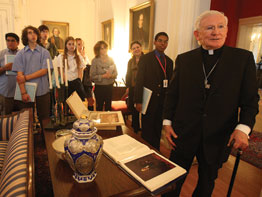 That’s why he and nearly 20 other students from Catholic, Jewish and public high schools came together Nov. 6 for the latest edition of the Lessons of the Shoah at the Basilica of the National Shrine of the Assumption of the Blessed Virgin Mary in Baltimore.

“We’re also taking this opportunity to examine genocide,” Michael said. “There’s a lot of love between Jews and Christians and we have to make sure something like the Holocaust never occurs again. Genocides are happening now and we’re trying to examine ways to stop them and find things we can personally do to prevent things like this in the future.”

The group, which includes students from Baltimore’s Cardinal Gibbons, Beth Tfiloh Jewish Community School and Bryn Mawr School, plus Catonsville’s Mount de Sales Academy, is a pilot program of interfaith study that tours various regional places of religious and historical significance. Sponsored by the Baltimore Jewish Council and the Jewish Museum of Maryland, the group aims to create dialogue between Catholic and Jewish students using the Holocaust to promote tolerance and understanding between the faiths. The students previously met at Beth Tfiloh to hear talks from a rabbi and a Catholic priest. They talked at length with Jewish students.

“Hearing them talk, it was so eye-opening,” said Mount de Sales junior Carolyn Schorr. “They weren’t angry or spiteful about what had been done to them.”

During a tour of the basilica, students also visited the residence of Cardinal William H. Keeler, retired archbishop of Baltimore.

Cardinal Keeler, who was honored by the Anti-Defamation League in April for his work in building Catholic-Jewish relations, spoke to the group and displayed various artwork done by Jewish artists.

“We resolved at the local level to improve the interfaith discourse,” Cardinal Keeler told the group of his time as archbishop.

Mount de Sales teacher Patricia Marlett toured the basilica with her students from the Holocaust studies class she offers at the school. She heard about the Lessons of the Shoah as she was preparing earlier this year for the first-time course. She called Jeanette Parmigiani, Director of Holocaust Programs at the Baltimore Jewish Council to participate.

The students will gather six more times throughout the year. The next Lessons of the Shoah will include a lecture by a University of Maryland professor on the rise of Nazi propaganda during the Holocaust in Europe and the Middle East.

“Their history,” she said, “is our history.”