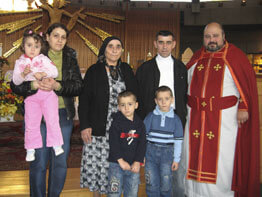 SPRINGFIELD, Mass. – Following years of persecution and not being able to attend Mass because of the threat of terrorism, Huzni Hermez and his family left their war-torn homeland of Iraq and found a place where they could freely practice their Catholic faith.

They are Chaldean Catholics, members of an Eastern Catholic church in union with the pope.

Speaking of being forced to leave his homeland, Hermez told The Catholic Observer, Springfield diocesan newspaper, through an interpreter: “That is real terrorism, when you are not welcome in your own country.”

“Even if Iraq would be paradise one day,” he added, the family would not go back. The horrible memories will never go away, he said.

Although he said terrorists “take your dignity,” they could not take away the family’s faith. “We did suffer a lot, but our faith kept us strong; prayers kept us going,” Hermez said.

The family celebrated Mass for the first time in five months Nov. 18 at St. Anthony’s, where they were welcomed by parishioners who spoke their language.

“We thank God that we are here today,” Hermez said. “And we thank the United Nations and especially the government of the United States that welcomed us with open arms.”

The family had been living for the past three years in Istanbul, Turkey, where they were no longer persecuted but lived in fear of being deported back to Iraq.

Suzanne Hannoush, a West Springfield resident and parishioner of St. Anthony’s who is helping resettle the refugees, said she remembers distinctly the first sentence that Khoshaba said to her the morning after they arrived in Springfield. “She said, ‘When we saw you, Christian people coming to our home, we saw sunshine.’”

However, amid the sunshine, Khoshaba has shed some tears of sorrow as well, as she longs for her 24-year-old daughter, Rima Hermez, who is still waiting in Turkey to be allowed to join the family here.

Hannoush, a native of Lebanon, knows what it is like to live in a country that is at war. War has raged on and off between Israel and forces in Lebanon since 1974. Hannoush experienced war throughout her teenage years.

In search of a peaceful future, she left her homeland in 1990 for Montreal, where she met her husband. Later that year, she came to the U.S. and was married. Hannoush still has many family members in Lebanon.

She said politics has nothing to do with why she, her pastor, fellow parishioners and others have welcomed the Hermez family. “We’re doing it as Christians helping Christians,” she said.

“That’s the only reason a Christian should do it,” she added. “You think of them as children of God and you try to help them in that manner only.”

Monsignor David M. George, pastor of St. Anthony Parish, said the Maronite rite is similar to the rite practiced by Chaldeans. He said that the parish felt it was important to help the refugees.

“Primarily, (they) are just a family in need, and if we can share our resources with those who are in need, that’s part of the Gospel,” he said.

Hannoush said that first Mass with the Hermez family was joyful for her family as well. Her husband, Norman, and their three sons all participated in the liturgy.

“I saw all of these parishioners helping them (and) welcoming them,” said Hannoush. “I felt heavenly myself. What about them? They felt at home.”

Hannoush said there has been a generous response from the community in the form of donations for the Hermez family. And, while Hermez said he was very grateful, he still asked for just one more favor from service agencies around the world: that they help Christians still in Iraq, and those in Turkey, come to the U.S. “and let them live their faith.”

Looking toward the future, Hermez said he wants to learn the English language and get a job. Referring to employment, he said he is “willing to do anything to be standing on our feet and not in need.”

But currently, the family still has needs. “We just hope that the people don’t forget about them next month and a month later,” said Hannoush.