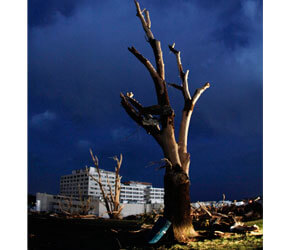 JOPLIN, Mo. – A Catholic hospital in Joplin took a direct hit from a severe tornado that struck the city May 22. Within a day of the twister, 89 people were confirmed dead, with the number almost certain to rise as rescue teams searched amid the rubble for survivors.

St. John’s Regional Medical Center was in the path of the tornado, variously described as being from a half-mile to a mile-and-a-half wide. A spokeswoman for the hospital told The New York Times May 23 that its 183 patients had been moved to other facilities. It was uncertain whether any perished during the storm. Telephone service to the hospital was cut off after the twister.

“Please keep the people of Joplin in our prayers, especially those whose lives were taken as well as those who lost loved ones,” said a May 23 statement from Bishop James V. Johnston Jr. of Springfield-Cape Girardeau. “We pray especially for the people of St. Mary’s Catholic Church and school who suffered a total loss as well as St. John’s Mercy Hospital which sustained major damage.”

In 1971, a major tornado struck Joplin, resulting in one death and 50 injuries. Joplin, in southwest Missouri near the borders of Kansas and Oklahoma, sits in “Tornado Alley,” so called for the frequency and ferocity of the region’s twisters.

The church, school and rectory buildings of St. Mary Parish were all destroyed by the tornado, but the parish pastor, Father Justin Monaghan, was reported unhurt. “The pastor rode it out in the bathtub. He’s fine,” said Leslie Anne Eidson, editor of The Mirror, newspaper of the Diocese of Springfield-Cape Girardeau. “He’s staying with a local parishioner right now.”

At Joplin’s other Catholic church, St. Peter the Apostle, parish administrator Elizabeth Runkle, told Catholic News Service May 23, “St. Peter’s is fine. We’re OK. We didn’t have any damage. Everybody’s fine.” St. Peter has an outreach center that they’re trying to use to speed aid to victims, according to Eidson.

McAuley Catholic High School, which serves the city’s two parishes, escaped damage, Eidson said. It was being used as an overflow triage center.

In a message posted on his Facebook page the evening of the storm, Father John Friedel, St. Peter’s pastor, said: “Just got back from closing down the Catholic high school, which was opened as an overflow triage center. Our area of town was untouched, though the neighboring parish (20 blocks away) has probably lost their entire physical plant. … I know you’ve all seen the footage of St. John’s, our Catholic hospital, which is probably also a total loss!

“Please keep our community in your prayers. … There has been and will be much suffering. Such destruction and violence. … Thanks, everyone, for your calls, texts and messages of support. Going to sleep now, so we can be at it again in the morning.”

Catholic Charities of Southern Missouri was in Joplin and seeking donations to aid tornado victims, she added. The Society of St. Vincent de Paul also was coordinating its own relief efforts in the Joplin area, according to Eidson, who said the Convoy of Hope, which has a large operation in southwestern Missouri, had already established a base in Joplin.

Early estimates put 10 percent to 20 percent of the 50,000-population city’s buildings as being damaged. Utility poles were uprooted by the tornado, making telephone communication difficult at best. Electricity and natural gas service was out in several sections of the city, with downed lines and dislodged pipes hampering search efforts. News accounts and Internet-posted photos and video were rife with flattened structures and twisted slabs of metal that had once been cars.

“The tornado has split Joplin in two,” reported Eidson. Travel in and out of the city was difficult in the wake of the tornado, she added.