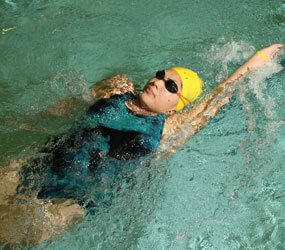 In her freshman year, the parishioner of St. Joseph in Fullerton set the standard in the 100-meter butterfly when she completed a race in one minute, 12:72 seconds.

Just two years later, Daniela eclipsed her own school record by more than two seconds – finishing a 100-meter butterfly in one minute, 10:42 seconds.

Now in her senior year, Daniela is focused on trying to shave a few more milliseconds off her time so she can qualify for Catholic Nationals, to be held at the end of January at Villanova University in Pennsylvania.

“She’s definitely my best butterfly swimmer,” said Kelly Ballwanz, Catholic High’s swim coach. “Even though she has broken the school record twice, she doesn’t tell people about it.”

Although Daniela is one of the best swimmers at Catholic High, it’s what she does outside the pool that makes her really special. In her freshman year, there were only 11 swimmers on the squad. After Daniela took it upon herself to recruit more, the numbers grew rapidly. This year, there are 23 swimmers and the coach had to make cuts.

“Even when we were small and not doing fantastic, she was still positive,” Ballwanz said. “We’re much more competitive today simply because of the numbers – and that largely due to Daniela’s efforts.”

Daniela, who began swimming around age 5, said she enjoys the camaraderie of the sport.

“I like the team bonding between the swimmers,” said Daniela, captain of this year’s squad. “I try to get them to know each other because we’re all really supportive of one another, and we encourage one another.”

Ballwanz said Daniela is “very open” to suggestions for improving her performance.

“No matter how I tell her to modify her strokes, she always tries it,” the coach said. “It might not end up working for her in the end because every swimmer is different, but she will at least give her best effort.”

Daniela has applied to Mount St. Mary’s University in Emmitsburg, Hood College in Frederick and Randolph-Macon College in Virginia. She hopes to pursue environmental science and is considering swimming at the collegiate level.

“She has just been a guiding force, along with the coach, in the development of our team,” Harmeyer said. “She’s smart, she’s friendly and she accepts people in.”